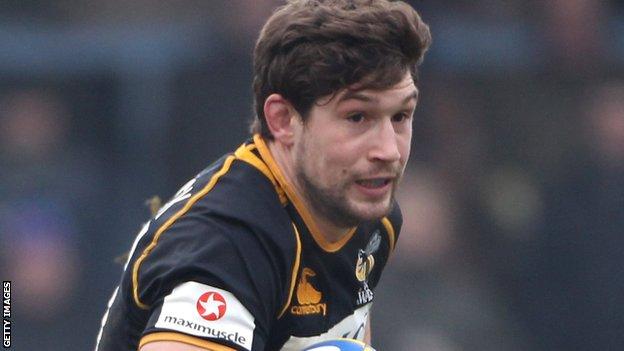 The 24-year-old came through the Wasps academy and made 114 senior appearances, scoring 17 tries.

Waldouck is under contract but handed in a transfer request, and BBC Northampton understand Saints will pay a fee to Wasps for his services.

"This has been a really difficult decision to arrive at but I feel it is right for me at this stage of my career," he said.

"I worked with Jim Mallinder a few years ago in the National Academy and know that he likes to produce teams that play attractive rugby," he added.

"My ambition to play for England is as strong as ever and I believe that playing Heineken Cup rugby for the Saints gives me the best platform to help achieve these goals.

Waldouck helped Wasps to Heineken Cup success over Leicester Tigers in 2007, coming off the replacements' bench in that game, and was third in the Premiership Young Player of the Season awards in the same year. He picked up a Premiership winner's medal the following season.

"I first started training with Wasps when I was 15 and the club has played a massive part in my life over the last nine years," said Waldouck.

Although he has yet to win a cap at senior level for England, Waldouck has represented the national side at U16, U18, U19 and U20 levels, as well as appearing for the Saxons.

He was an unused member of the England parties that toured New Zealand in 2008 and Australasia in 2010 last year.

Saints director of rugby Jim Mallinder said: "Dom may be young, but he already has a great deal of experience at club level and with the Saxons and I'm sure that his best years are in front of him."

Wasps director of rugby Dai Young said they were resigned to losing their vice captain from 2010-11.

"Despite our attempts to talk him round, he has been adamant that he needs a fresh start and it wouldn't do any of us any good to keep him here against his will."