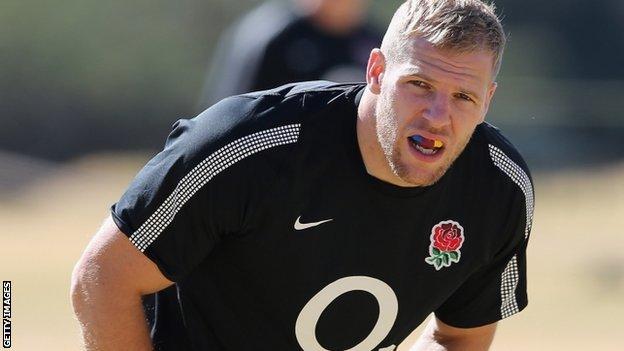 England back-row forward James Haskell is the most notable omission from England's 32-man senior squad for the forthcoming season.

Haskell was in the starting line-up in the drawn final Test against South Africa in Port Elizabeth last month.

Despite his omission from the elite squad, Haskell could still feature for England at Twickenham in November and December, when the hosts face four Tests in three weeks.

The 27-year-old has been included in the Saxons squad, and Lancaster said: "Experience tells us that form and fitness will play a major role in selection prior to the internationals in November and December, and any of the players in the senior and Saxons squads could easily be involved.

"We saw this in January when Geoff Parling came in as an injury replacement for Louis Deacon and has played every Test since.

"There is always movement which opens the door for players and I am sure next season will be no different."

Haskell is on his way back from New Zealand, where he has been playing provincial rugby in Dunedin, to rejoin Wasps for the start of the new season.

Harlequins scrum-half Care, 25, was dropped from the Six Nations after he was charged with drink-driving before being recalled to the England set-up by Lancaster for the tour to South Africa.

Twenty-six of the squad who toured South Africa last month are included, along with six players who did not tour because of injury - Tom Croft, Courtney Lawes, Charlie Sharples, Matt Stevens, Rob Webber and Tom Wood.

Among other notable absentees from the seniors are David Strettle, Paul Doran-Jones and Ugo Monye, all of whom have been included in the Saxons squad.

Both squads will take part in a three-day training camp in Loughborough next month.