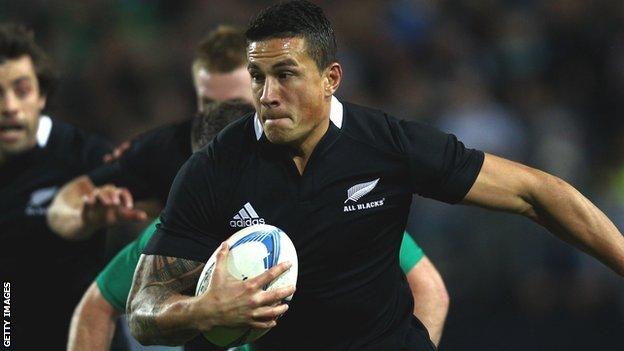 New Zealand centre Sonny Bill Williams has put his All Blacks career on hold after signing a 12-match deal with Japanese side Panasonic Wild Knights.

The 26-year-old will quit the world champions at the end of the Super 15 season in August, ruling him out of the four-nation Rugby Championship.

Williams also revealed he was in negotiations to return to Australia's National Rugby League (NRL) in 2013.

He misses games against Scotland, Wales and England later this year.

Williams excelled in the All Blacks' Test wins against Ireland last month.

He said he felt comfortable with current side Waikato Chiefs, but wanted to honour "a handshake agreement" he had in place with the NRL club, believed to be Sydney Roosters according to media in Australia and New Zealand.

"I haven't signed anything yet and I'm not in a position to elaborate on that [which NRL club he had agreed to join]," said Williams.

"I didn't think I would have loved it as much as I have back here. To be honest I kind of felt like I'd found my place at the Chiefs ... but it just goes back to [the fact] I've given someone my word and I've had to go on with it even though it was tough."

New Zealand coach Steve Hansen, who will lead the side for the August and September inaugural expanded Rugby Championships, where they will face Australia, South Africa and Argentina, said: "It is a shame and disappointing that New Zealand rugby is losing him.

"In talking to him, I know the decision has been a tough one but we fully respect why he has made this decision.

"He is an outstanding athlete who has stamped his mark on the game and hopefully this is not the last time we see him in New Zealand rugby."

Williams infamously walked out on a five-year contract with the NRL's Canterbury Bulldogs in 2008 to switch codes and join French club Toulon, earning him a five-year ban from the NRL which expires at the start of next season.

The New Zealand Rugby Union coaxed Williams home from Europe in 2010. He played one season with the Canterbury-based Crusaders last year before joining the Chiefs this season.

Williams also has a part-time boxing career and has won five bouts, the most recent of which earned him the New Zealand heavyweight title.

After his time in Japan, Williams will have played in three professional sports - rugby union, rugby league and boxing - on three continents. His next professional boxing bout is expected to be in South Africa.