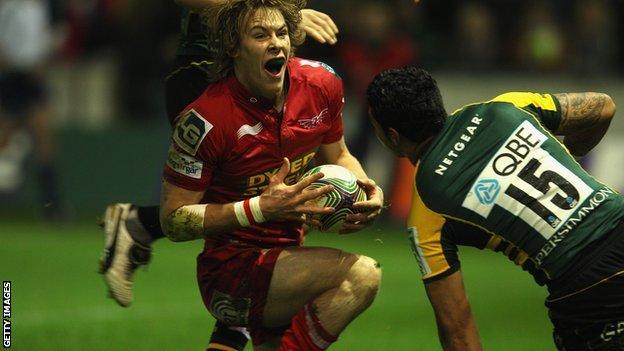 Wales international Liam Williams and fellow back Andy Fenby have signed contract extensions at the Scarlets.

Full-back Williams, who made his Wales debut in their in June, has agreed a new three-year deal at the Llanelli region.

Wing Fenby has extended his Parc y Scarlets deal for another year.

"Andy and Liam are important players for us," said coach Simon Easterby. "It's important to secure the talent and commitment of these guys."

Williams, who was picked up by Scarlets in 2009 playing for Llanelli RFC initially in 2010/11 before being handed a development contract with the Scarlets senior squad, emerged onto the regional stage in the 2011/12 season, scoring eight tries in an impressive debut season that culminated in a Wales call-up.

The 21-year-old, who touched down in their shock last season, played against the BaaBaas at The Millennium Stadium before touring with the Wales squad in Australia this summer.

Williams played in Wales' midweek win over the ACT Brumbies and the former steelworks scaffolder is delighted with his new deal.

"It's been an unbelievable 12 months for me," admitted Williams.

"And to get my Wales cap was a real highlight following a run of games at the Scarlets last season against some of the top sides in Europe."

Easterby added: "It's great to secure one of the Scarlets' most talented young players on a long term contract - Liam has impressed everyone with his skills and commitment last year and we're sure he'll only get better."

Fenby joined the Scarlets in May 2009 following a spell with the Newcastle Falcons and the 26-year-old from north Wales, who has scored 55 points in 50 appearances, is preparing for his fourth season at the Scarlets

"It's great to be part of a squad that's getting stronger and more competitive," said Fenby.

"With the talent we have in our ranks now, particularly in the backs, it's an exciting place to be.

"I was pleased with my form at the back end of last season - it was good to get game time and build my game after my injury and pull a string of decent performances together. I'm looking forward to next season, and pushing my game on further."