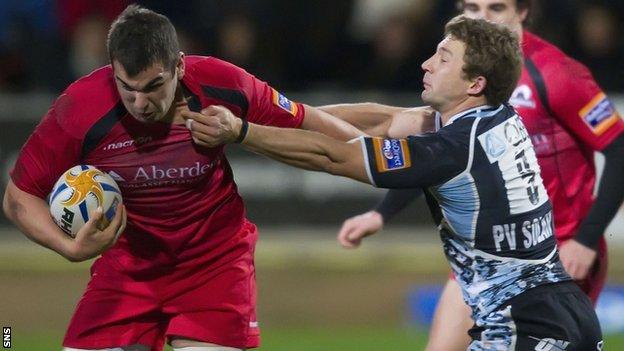 Glasgow Warriors and Edinburgh will face Irish opposition on the opening weekend of the RaboDirect Pro12.

Edinburgh will host Munster while the Warriors travel to face Ulster, with the matches taking place on 31 August, 1 or 2 September.

Glasgow play the first match at their new Scotstoun home the following weekend against Scarlets.

The Scottish sides will face each other twice in December in the traditional 1872 Cup double-header.

The full list of league fixtures ends with Edinburgh at home to Dragons and Glasgow visiting Connacht on the weekend of 3-5 May, with the play-off semi-finals taking place the following weekend and the final scheduled for 25 May.

Gregor Townsend leads Glasgow for the first time this season, replacing Sean Lineen as head coach, and he told the Warriors' website: "It's a tough opening to the season with the away game at Ulster but we are really looking forward to it.

"We have a squad here that won't show any fear going to play at Ravenhill and a win there would give us real confidence for the rest of the season.

"Of course we're all massively looking forward to our first game at Scotstoun. It's going to be a very special occasion for us.

"The stadium is our home and we want to make it as welcoming as we can for our own fans, and on the flip side of that, make it a place that's pretty intimidating for the opposition."

We can deliver a special season for Edinburgh Rugby

Edinburgh's league form last season - finishing second bottom of the division - contrasted with their run to the semi-finals of the Heineken Cup.

And head coach Michael Bradley wants the capital side to get off to a positive start.

"Munster have consistently been one of the top teams in Europe so to face them at home in the season opener is a fantastic challenge, and one which the players and fans will relish," he told the Edinburgh website.

"This is a huge match and I'm sure the players can't wait to take them on at Murrayfield as we aim to get our league campaign off on the right foot from the outset.

"It's fantastic start to the season for all of us and I believe that together, with the strong support of the Murrayfield fans, we can deliver a special season for Edinburgh Rugby."