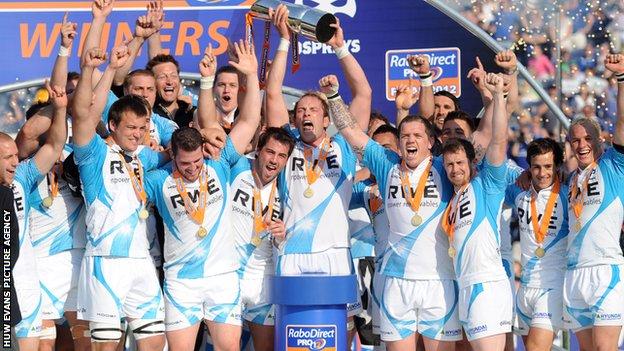 Pro12 champions the Ospreys travel to Treviso's Stadio Monigo to kick off their 2012-13 title defence on Friday, 31 August.

That game will be broadcast live on Scrum V on BBC Two Wales with a 1905 BST kick-off.

On the same night Newport Gwent Dragons host new Italian side Zebre and the next day Cardiff Bluesare at Connacht.

The Blues' first competitive match at the permanent Arms Park home to which they have returned will be against Edinburgh on Friday, 7 September.

That clash will be Scrum V's featured live game on BBC Two Wales.

A day later, the Ospreys host Ulster at the Liberty Stadium, this time for Y Clwb Rygbi's audience on S4C.

The first Welsh derby of the season will be on Saturday, 15 September when the Dragons welcome the Blues to Rodney Parade for an 18:30 BST kick off on Y Clwb Rygbi.

The Christmas and New Year period is again set aside for all-Welsh clashes.

The Ospreys host the Dragons and the Blues visit the Scarlets on the weekend of 21-23 December.

On the weekend of 28-30 December, the Blues host the Dragons and the Ospreys welcome the Scarlets.

with the Liberty Stadium hosting Ospreys v Scarlets and the Blues facing the Dragons at the Arms Park.

The Pro12 play-off semi-finals are scheduled for the weekend of 10/11/12 May, with the grand final on Saturday 25 May.