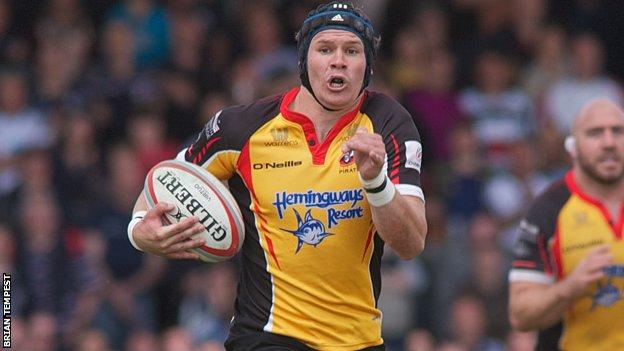 Cook, 28, signed a new contract with Pirates in April but he has rescinded on the deal to play in the Premiership.

"It's a great opportunity for me and I'm genuinely excited at the prospect, as playing in the Premiership has always been a goal of mine," he said.

"Leaving the Pirates wasn't an easy decision to make as I've spent three great seasons there and made friends for life."

Cook continued: "They've been great about it all and their result will be the first one I look out for each weekend.

Rob Cook's departure will be a blow for the Pirates, but not an unexpected one.

Many were surprised that he signed a new deal in April as he had been arguably the Pirates' standout player last season.

Plucked from relative obscurity at Nuneaton, Cook's unusual kicking stance got him noticed, but so too did his excellent record with his boot.

"Once I'd spoken to Nigel [Davies, head coach] however, and listened to his vision for the club, I knew immediately that it was something I wanted to be part of.

"Gloucester have got a great young squad and I'm just looking forward now to getting down to some hard work with my new team-mates in training and making sure I'm ready to go when called upon."

Cook joined the Pirates from Nuneaton at the start of the 2009-10 season and he totalled 1,029 points in his three seasons at the Mennaye.

With Olly Morgan still recovering from knee surgery, Davies was on the look out for a specialist full-back to compete with Martyn Thomas.

"Ideally, I like to have three players competing for every position in the side," said Davies.

"Olly's doing well with his rehab but we don't want to rush him. If Martyn were to pick up a knock we'd be short of numbers.

"So, Rob is a perfect addition to the squad. He's been a standout performer at Championship level for several seasons and brings something different to the table in that he's a quality goal kicker as well.

"We feel that he's ready to make the step up and are delighted that he'll do so in the Cherry and White of Gloucester."