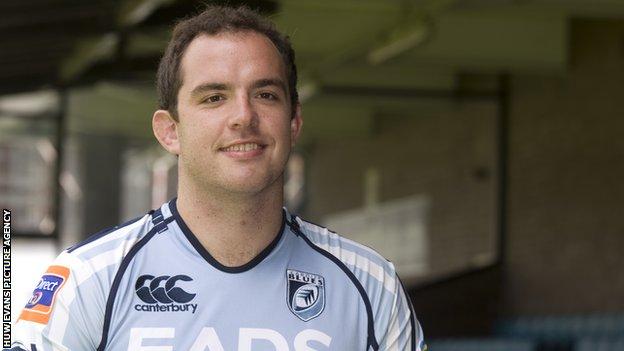 Reed, who has one Wales cap to his name, was released by the Scarlets at the end of last season.

The 24-year-old has since joined the Blues but says the opportunities offered to him were limited.

"As far as I'm concerned it put me a back a bit being a Welsh international. I think the regions found me less appealing," Reed said.

"I thought that might have given me more leeway to negotiate with other clubs and there would be a lot more offers on the table."

Reed was named in the 45-man Wales training squad for the 2011 Rugby World Cup in New Zealand.

He had to wait until February 2012 to make his international debut when he appeared as a second half replacement during Wales' victory over Scotland in the Six Nations.

"When you're actually in the Wales set-up it's hard for the regions to kick on because their best players have left.

"You've got to leave your region for an amount of time and there was a lot of talk before the Six Nations about boys moving to France.

"You can understand why they [the regions] get frustrated with us leaving when we do.

"It's tough jumping in and out. It's just how the game is in Wales. You would never turn [down] the chance to play for your country. You would just roll with it."

Reed admits he was sad to leave the Scarlets at a time when he had undergone knee surgery but is grateful of the chance offered to him by the Blues.

"They [Scarlets] didn't give me the contract I was after and they told me I could look elsewhere," he said.

"Everything was a bit dry for me at the Scarlets so hopefully this will give me a new lease of life moving down here [to the Blues].

"I was reassured by the Blues straight away if I had the knee done and everything went to plan that the contract would be on the table for me and that was great to know."

"He gave me my first start in a Scarlets jersey and I've got a really close relationship with Phil," he added.

"[He] helped me on and off the pitch and [I'm] looking forward to working with him again."