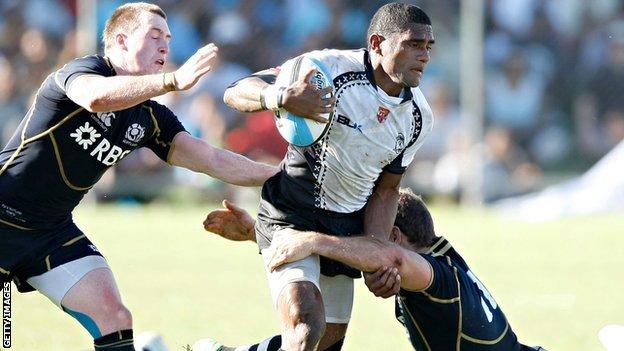 Fiji scrum-half Nikola Matawalu has signed for Glasgow Warriors from Navy Rugby Club in Suva subject to a work permit and medical.

Glasgow head coach Gregor Townsend says the 23-year-old was the pick of the Fiji side that lost to Scotland during their summer tour to Australasia.

"He was hugely impressive in the Test match in Lautoka and really caught the eye," said Townsend.

"And I think the Warriors fans will really take to his style of play."

Matawalu, described as lightning quick with "deft sleight-of-hand ball skills and a typically dangerous Fijian side-step", has made six appearances for his country and has also featured for them on the sevens circuit.

"Niko is a really exciting signing for us," said Townsend. "He's quick, strong and is one of those types of players that can do something a bit different, the unexpected.

"To be named player of the tournament at this year's Hong Kong Sevens underlines what a special talent we have joining the club."

The Fiji international thinks it is an exciting time to be joining Warriors, who reached the Pro12 play-offs last season, and is sure he will be able adapt to the Scottish climate and style of play.

"Obviously it's going to be a massive change from playing in the southern hemisphere, but I'm really looking forward to the challenge," said Matawalu.

"The quality of the squad, a lot of the guys I played against in the Scotland match last month, is really impressive and I hope I can add to that."