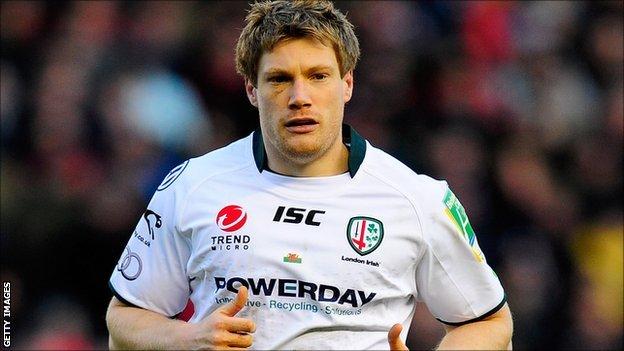 Jonathan Spratt has returned to Ospreys after a year away with London Irish.

The 26-year-old centre joined the Exiles on a one-year deal in 2011, and signed a two-year extension after impressing coach Toby Booth.

But following the departure of Booth and his coaching team, Spratt has been allowed to re-join Pro12 side Ospreys.

"When the opportunity arose to come back I jumped at the chance," said Spratt, capped twice by Wales on the summer tour to North America in 2009.

"Having spent a year at London Irish and gained some great experience, the changes there meant I had to consider my options and while I could have stayed, the prospect of rejoining the Ospreys and being part of what is a young and ambitious group is an exciting one.

"There's nothing like playing for your home region in front of a big crowd at your home stadium."

Spratt made 11 appearances for Irish last season, scoring his sole try in the away Heineken Cup victory over Racing Metro in December.

He moved to the Aviva Premiership club after spending three seasons with Ospreys, making 23 appearances and scoring two tries.

Signing a two-year contract, he becomes the first new recruit as Ospreys look to re-build having lost 11 players from last season's squad.

"It's good to be able to bring Jonathan back to his home region," said Ospreys coach Steve Tandy.

"He's passionate about this place, loves the Ospreys and will be a real asset this season. He's a skilful player who has always been underrated, with a good attitude, someone I know well from my time as a player in the same squad."