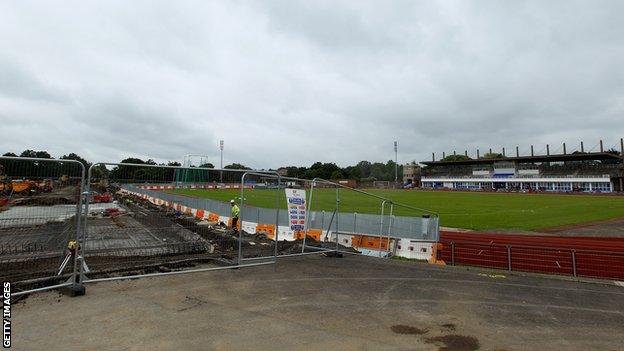 Saracens' opening match at their new Copthall Stadium home in Barnet will be against Exeter Chiefs on 16 February.

The transformation of the stadium into a 10,000-capacity venue with a synthetic pitch is yet to be completed.

However the club have announced that five Premiership games will be staged there next season after playing at five other grounds in the area in 2012-13.

A club spokesman said: "We're grateful to our loyal season ticket holders and supporters for their patience."

Prior to the move, next season's home matches will be played at their current home Vicarage Road as well as Twickenham, Wembley, Stadium MK, a central London venue set to be announced.

Two other matches will be played "further afield".

It is not clear whether these games will take place in England or abroad, following Saracens aborted attempts to move a Heineken Cup tie to Cape Town last season and their arrangement of recent non-competitive matches in the United Arab Emirates and Hong Kong.

Earlier this year the club were given approval to revamp the stadium in north London, after an 18-month consultation period with local residents and Barnet Council.

Following this, Saracens chief executive Edward Griffiths said that he hoped the club would be playing in the stadium by the end of 2012.

But despite missing this target, the club will still be able to finish next season playing their games at their newly refurbished permanent home.