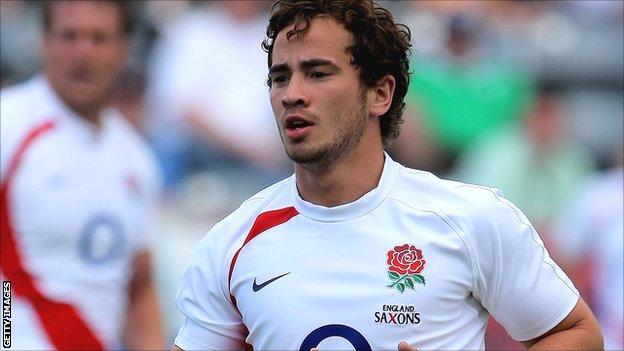 Sale Sharks fly-half Danny Cipriani has said his "ultimate goal" is to regain his place in the England team.

Cipriani's last cap came in 2008 and he has returned to the Premiership after two years in Super 15 with the Rebels.

The 24-year-old told BBC Radio Manchester: "That (an England recall) is the ultimate goal but I've got massive aspirations here at Sale.

The team is growing together very well...I think this is a good time to be around the Sale Sharks team

"I've got to get into this team, make sure I'm a starting fixture, show my experience and show what I've learned."

The former London Wasps man made his international debut against Ireland in March 2008, kicking 18 points in a 33-10 victory for Brian Ashton's side.

But he has been out of favour with England since a disastrous performance against South Africa later that year, when England lost 42-6 at Twickenham.

When Cipriani's move to Sale was confirmed in March, England's newly-appointed coach Stuart Lancaster told BBC Sport of his delight that he had decided to return home.

As well as his hopes for a return to the international game, Cipriani is eager to begin the latest chapter of his club career with Sale.

The Sharks have appointed a new coach in Bryan Redpath and are moving from Edgeley Park to the Salford City Stadium, where they will groundshare with Super League side Salford City Reds.

They also have Heineken Cup rugby to look forward to, as a result of finishing sixth in the Premiership last season.

Cipriani continued: "The team is growing together very well. We've got a big, strong side and our conditioners are making sure everyone's very fit, so I'm looking forward to it.

"(Chief executive) Steve Diamond has got everything going forward in the right direction.

"He's been making sure the club hasn't been losing a lot of money and he's made some big signings with Richie Gray and Eifion Roberts coming, and Hendre Fourie is like a new signing because he's fit again this year.

"There's the likes of Mark Cueto and Dwayne Peel who have been here for a while, and there are young players like Will Addison and Rob Miller who had fantastic seasons last year.

"I think this is a good time to be around the Sale Sharks team."