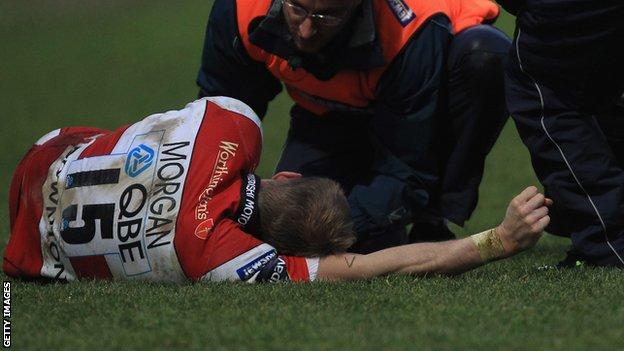 Gloucester director of rugby Nigel Davies insists Olly Morgan will have a part to play this season, despite two more full-backs joining the club.

Morgan has been out since January with knee ligament damage and faces further delays because of an infection.

When he is fit the 26-year-old will face competition for his place from Rob Cook and Martyn Thomas.

"It's about six months before Olly can get back on the park so we needed that cover in place."

Morgan made 16 appearances for Gloucester last season before being injured against Worcester Warriors.

Without another specialist full-back in the squad, former head coach Bryan Redpath used centre Jonny May to cover for Morgan's absence.

But Davies now has two options in Thomas, 24, who joins from Newport and Cook, 28, who arrived from Cornish Pirates last week.

Davies believes Cook's kicking ability will be an asset to his new-look team next season.

"He's been consistently good for the Pirates. He's very accomplished and he's also an 80%-plus goal kicker," said the Welshman.

"When you look at last season when Gloucester lost eight games by three points or less, that says something about discipline and our ability to take the penalties that come our way. He can certainly add to that and add a lot of competition."