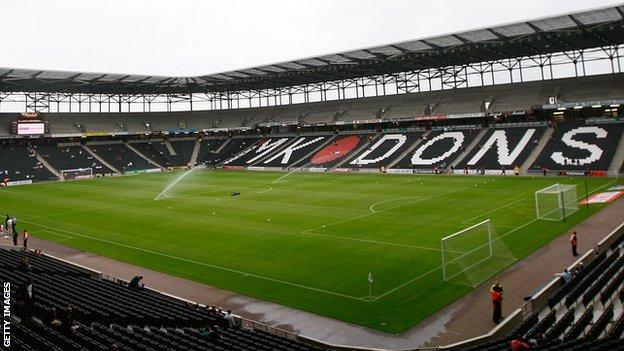 Northampton Saints' Allan Robson believes they gain an advantage from playing their Premiership match away to Saracens at Stadium MK.

Saracens are playing at different 'home' venues prior to their move to Barnet Copthall, including the match against Saints on 29 December.

Club chief executive Robson told BBC Northampton: "It does suit us to be playing nearer to home.

"It's a ground that we know and we've got some happy memories there."

Saints beat Ulster and Perpignan in the knock-out stages of the 2010-11 Heineken Cup in Milton Keynes, using the ground because their Franklin's Gardens home is below the minimum capacity required by European Rugby Cup.

They were beaten by Munster at the 22,000-seater stadium in last season's competition during the pool stage.

"We've still got to play the same team," added Robson. "It's Saracens whether it's here or 100 miles away.

"They played a play-off game there when we were in Division One, so they think they know the stadium a little as well.

"But we do look for as much advantage as we can possibly get, and on our doorstep we can try to fill the place with Saints fans."

All public ticket sales and hospitality bookings for the match are being handled by staff at Franklin's Gardens.