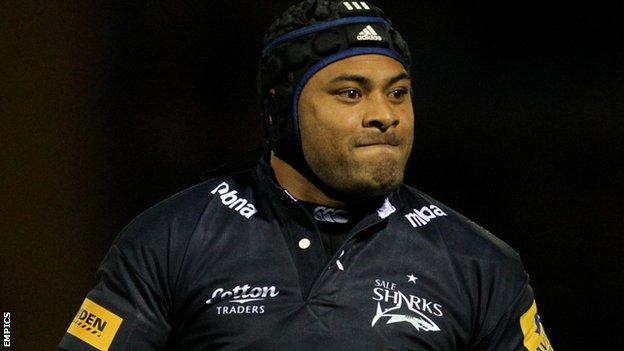 Sale Sharks captain Sam Tuitupou believes the club's next target should be a top-four Premiership finish.

The 30-year-old joined the Sharks from Munster in April 2011 and was handed the captaincy in pre-season.

He made 23 appearances and scored three tries in his debut season, leading the side to a sixth place finish.

"We want to improve on how we went last year so we're looking at top four and winning a few games in the Heineken Cup," he told BBC Radio Manchester.

"We've got a tough pool but they look beatable at home for us so we're looking forward to putting on some good performances."

Tuitupou is currently missing pre-season training after undergoing surgery on a thumb problem, but says he will be fit for the Sharks first game at their new home, the Salford City Stadium, for a friendly against European Champions Leinster.

With former Sale scrum-half Bryan Redpath returning to the club as director of rugby this summer, the New Zealand centre is hoping he can instil a new brand of rugby.

"He's got a running game and he loves to attack and that is exactly how we want to play," Tuitupou added.

"We've got a lot of young boys out wide and a lot of speed and we want to score heaps of tries this year.

"You saw the last few years the way Gloucester have been playing, they've always been using their running backs, and that is what we're looking to use with all the talent in our backline."