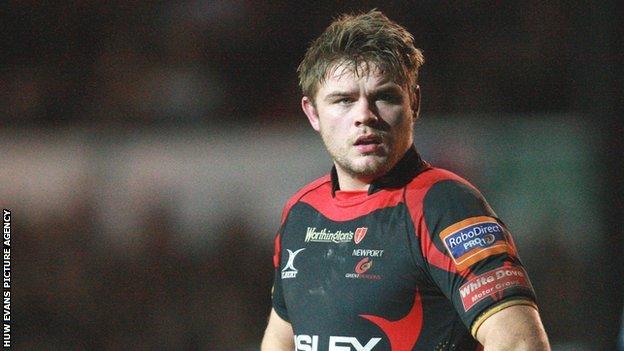 The back-row, who has come through the Dragons' age-grade system, led the Welsh region's Under-20s and made his senior debut in 2006 aged 18.

"I'm overwhelmed and really honoured to have been named captain for the coming season," said the 25-year-old.

"The Dragons players are more than just co-workers - these guys are my mates on and off the field. It makes this a special place to play."

Evans takes over the captaincy from Wales lock Luke Charteris, who left Dragons at the end of last season to join French Top 14 side Perpignan.

The flanker will form a potent Dragons back-row with Wales stars Dan Lydiate and Toby Faletau, while up and coming player Darren Waters will also be pushing for selection.

"Captaining doesn't always guarantee selection and I know that it's going to be tough this season with the Welsh boys in the side and Darren on my tail," Evans said.

"I want to ensure that I'm selected on my own merit and if I want to be pushing for international selection I need to be able to stand up alongside the best.

"Like most young players I aspired to captain the regional side, but to be doing it at a young age is more than I would have dreamed of.

"Having said that, we know what our goals are - to make Rodney Parade a fortress and pick up those crucial wins on the road so I'm as focused as ever on the job in hand.

"There's a great atmosphere in the camp and that's shown in the intensity of our pre-season training. These are boys who will lay themselves on the line without hesitation and it's and very exciting to be asked to represent them in this way."

Dragons will begin the Pro12 campaign on the weekend of 31 August-2 September at home against new Italian side Zebre.