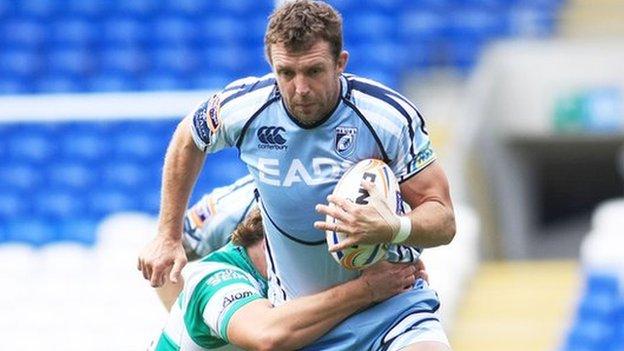 Jones, who joined the Cardiff Blues in 2004 from the Celtic Warriors, was forced to retire at the end of the last season because of a shoulder injury.

"I'll aim to make sure all the players are happy and they can focus on the game," said Jones.

Lee Jarvis, the former Dragons fly-half, has also been appointed to the backroom staff as a skills coach.

Jarvis, who played once for Wales and club rugby for Cardiff and Pontypridd, is the final piece in the jigsaw of new Blues director of rugby, Phil Davies, and joins a support team which already includes Gareth Baber as attack/backs coach and Xavier Rush as defence coach.

Former Wales lock Jones was the first Blues player to reach 100 games for the region and went on to make 175 appearances.

"It will be a bit strange having played for the Blues for so long not being out on the field, so it's nice to be able to stay involved in a role that suites me at the moment," said Jones.

"The role is to try to make sure that everything runs smoothly for the team and I'll be working closely with Gafyn Cooper who is the rugby operations manager at the Blues."

Director of rugby Davies, who was appointed this summer at the Arms Park, had revealed he wanted to promote former Blues players to his new backroom team.

"I felt it was important to keep hold of some people whom I consider to be real Blues men," said Davies.

"He is going to be our match-day team manager and will also be involved with mentoring the younger front five forwards at the region.

"His experience and knowledge of the team and the league will be invaluable for me and that was one of the key reasons we have kept him involved with the team.

"He made a fantastic on the field contribution now this is the next part of his Blues career."