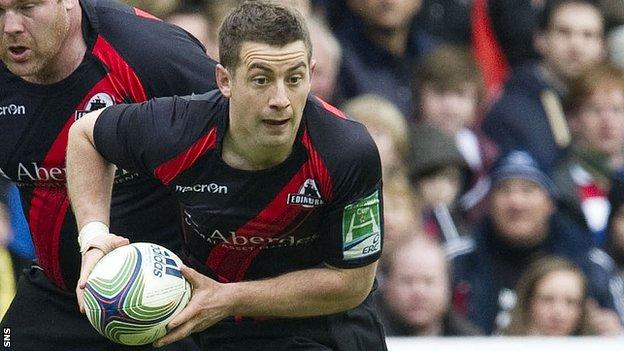 Edinburgh stand-off Greig Laidlaw will resume his duties as club captain for the forthcoming season.

The 26-year-old was given the armband by head coach Michael Bradley last term and was the club's player of the year.

"It's taken a lot of hard work to get to this point in my career," Laidlaw told the Edinburgh Rugby website.

"But that level of commitment is no less than is required to excel at this level of the game and to achieve the success we all want for this club."

Laidlaw cemented his place as Scotland's number 10 in this year's Six Nations and started all three of the summer Tests.

The Borderer, who has made more than 100 Edinburgh appearances since he joined from Jed-Forest in 2006, will be supported by two vice-captains this season, with back-row Roddy Grant and lock Sean Cox taking up the roles.

"There are a number of key values that I want to see at Edinburgh Rugby and Greig is a classic example of how we want the club to operate.

"He is an excellent professional, is exceptionally committed, an inspirational leader and a consistent performer; there's little more you can ask of your captain."