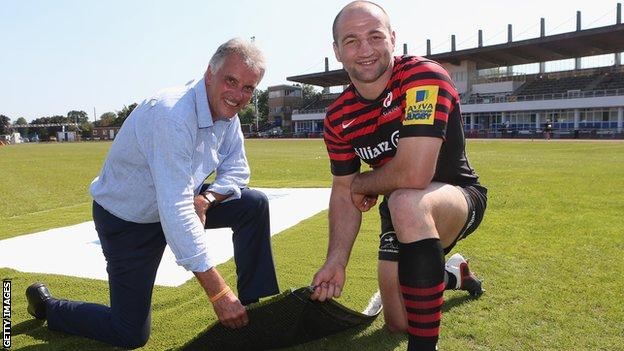 Saracens have agreed an £8m deal which will see their new ground at Barnet being named Allianz Park.

The six-year agreement with the German financial services company will defray part of the £20m cost of redeveloping the former Copthall Stadium.

The ground is currently being transformed into a 10,000 capacity venue with a synthetic pitch.

And the club plan to play their first Premiership fixture there against Exeter Chiefs on 16 February.

Prior to the move, they will play matches at a number of different venues, including their current home in Watford, Twickenham, Wembley, Stadium MK, a yet-to-be-confirmed central London venue, and twice at grounds "further afield" - which could mean playing abroad.

"Over the past three years, the club has made outstanding progress in terms of team performance on the field, building a strong global profile and securing a home ground.

"We are now starting to realise our commercial potential. This deal represents a massive step forward for Saracens," said club chairman Nigel Wray.

The new stadium will also be used as a community sports hub and be available for use by local schools free of charge.