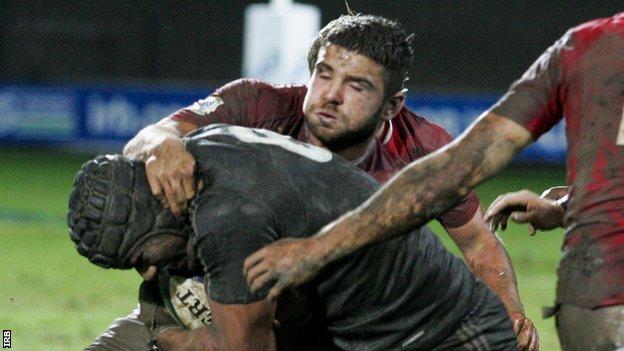 Scarlets forwards coach Danny Wilson is determined to craft a pack capable of taking on the best in Europe.

The Welsh region has a reputation for playing exciting, open rugby but former Wales Under-20s coach Wilson is determined to add extra graft up front.

"It's important that we add to that ethos of running rugby here and be able to play a forward-dominated type of game as well," Wilson said.

"Especially in Europe we need to be more competitive at set-pieces."

Wilson is excited by the forward talent emerging at Parc y Scarlets, with Wales U20s fielding an all-Scarlets front-row during the recent IRB Junior World Championship.

Hooker Kirby Myhill captained the Wales tyros, with Rob Evans and Samson Lee propping either side of their skipper.

"There's some very good youngsters coming through - you saw... all the Scarlets that came through for Wales during the [Junior World Championship], so on the foundations that are in place we need to build on those," Wilson added.

"It's about a lot of technical coaching, exposing these guys to more and more technical work when there's not a game at the end of the week. I think that gives us the ability and the opportunity to do that.

"And it's also about giving players the opportunity to play for the region when deserved... for me these boys need to earn that opportunity and not think that they're on a conveyor belt and their opportunity will come.

"What I've seen so far is that the boys are busting a gut to earn that opportunity and I'm looking forward to the competition that is here.

"With the recruitment that we're currently piecing together, hopefully we'll have a little bit more depth and be able to therefore get that balanced competition we need.

"There's a number of good forwards at this region and we've hopefully recruited a couple more."

That came in the wake of losing second rows Lou Reed, Damian Welch and Dominic Day during the close season.