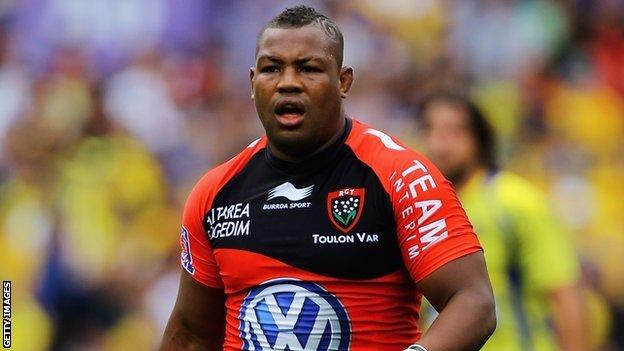 The issue arose following a test taken after the Top 14 final on 9 June.

The club say the result was caused by approved painkillers and anti-inflammatories for back pain.

According to reports in France, Armitage will appear before the French rugby anti-doping commission on 21 August.

In a club statement, Toulon have defended the 26-year-old, who has played five times for England.

"Before the game, Steffon Armitage took two tablets of paracetamol codeine, a medicine strictly authorised by the French Agency for the Fight against Doping [AFLD]," they said.

"Having suffered with back pain in the week leading up to the game, Steffon Armitage was given anti-inflammatories as well as paracetamol codeine (two to four tablets per day) for these pains. All of the medicines administered are authorised by the AFLD.

"The presence of morphine in Steffon Armitage's urine sample is explained by the fact that 10% of this medicine (paracetamol codeine) is converted naturally into morphine.

"Steffon Armitage has absolutely not taken any illegal substance to improve his performances, but solely a medicine strictly authorised by the AFLD and well known to all."

Armitage won his first international cap against Italy in the Six Nations in 2009, following his brother Delon into the team - the first pair of brothers to represent England since wingers Rory and Tony Underwood.

But he has not featured since a game against the same opposition the following year and moved to France in 2011 after five seasons with London Irish, who he joined after coming through the Saracens academy.