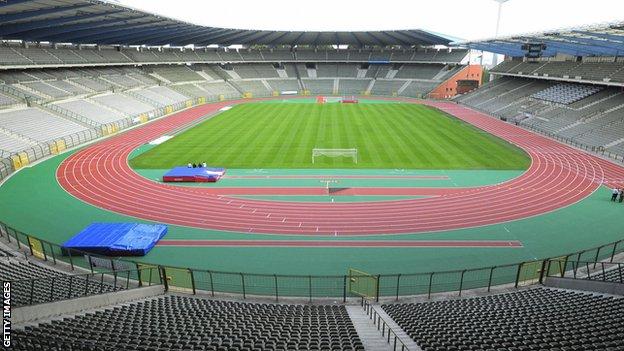 Saracens are to play one of their home Heineken Cup group matches in the Belgian capital, Brussels, next season.

The game against Racing Metro of Paris will take place at the King Baudouin Stadium on 20 October.

"We are confident of staging a special and memorable occasion," a club statement read.

Last season, Saracens tried to arrange a Heineken Cup game in Cape Town but had to move it to London after failing to agree which venue to use.

They will play at a number of London venues this season, including Wembley and Twickenham, prior to moving to their new Allianz Park home at Barnet next February - but had promised to take two matches "further afield".

It will be the first time a top-level rugby match has been played in Brussels.

The King Baudouin Stadium was scheduled to stage a Heineken Cup game between Ulster and Stade Francais in 2009 and more than 30,000 tickets were sold, only for bad weather to force a postponement on the morning of the match.

Saracens are hopeful that with support of the Belgium Rugby Union, the Mayor of Brussels and the Brussels regional government, they will also attract a big crowd but are offering seats free of charge to fans who have bought season tickets for 2012-13.

"We are excited by this opportunity to take a top European clash to a fast-emerging rugby audience in Belgium," the statement added.

The club have yet to confirm the venues for their other pool matches against Munster and Edinburgh, although the former on 16 December will be at a "central London venue".

The King Baudouin, which has been Belgium's national stadium since 1930, has a capacity of 50,000 and normally stages international football and athletics meetings.

It was formerly known as the Heysel Stadium and the darkest chapter in its history occurred in 1985 when 39 supporters died and more than 600 were injured after a wall collapsed during the 1985 European Cup final between Liverpool and Juventus.

Following the tragedy, the stadium underwent major renovation work during the 1990s.