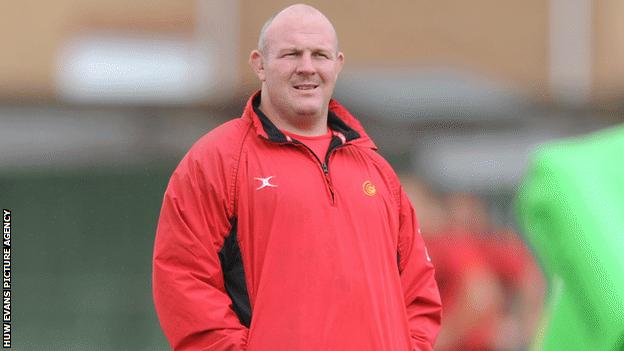 Newport Gwent Dragons are waiting for the Welsh Rugby Union to ratify the appointment of Iestyn Thomas as scrum coach.

Thomas, the former Scarlet and Wales, prop is expected to replace Danny Wilson, who has joined the Scarlets.

"Iestyn has been working for us for a few weeks on a consultancy basis," said Dragons director of rugby Robert Beale.

"He has been in for a few weeks and the front row forwards, in particular, have really taken on board his advice."

Beale said there are "a few issues" that need to be settled with the WRU before Thomas can be officially appointed.

"Hopefully they will be settled in the next week or two and we will make a positive announcement but he has had a positive impact on our scrum," he added.

"Iestyn has just finished playing so he has been involved with coaching at the highest level."

The governing body have to rubber stamp every coaching appointment by the Welsh regions as part of the participation agreement signed in September 2009.

The 35-year-old was forced to retire after a decade with the Scarlets. Thomas, who was capped 33 times by Wales, had been the cornerstone of the Scarlets pack for the last 10 years and played 214 times for the region.

"Iestyn is a specialist in an area he knows very well - the scrum," said Beale.

"Iestyn desperately wants to come back to the region and we looked at him as a player.

"Unfortunately, due to his neck injury he had to retire from the game, so the obvious thing was to look at him to assist in a coaching capacity.

"He is a Pontypool boy and we think it is a great step for us as a region. He brings a wealth of experience of the dark arts.

"All our front row forwards are really impressed with his approach, I am really hopeful that we can include him as one of our assistant coaches for the future."

Thomas was appointed vice-captain for the Scarlets and was one of three players in the squad with more than 200 appearances, along with Stephen Jones and fellow prop Phil John.

He joined the Scarlets in 2002 and played for Wales in the 2003 Rugby World Cup after making his debut in his country's victory against Samoa in 2000.