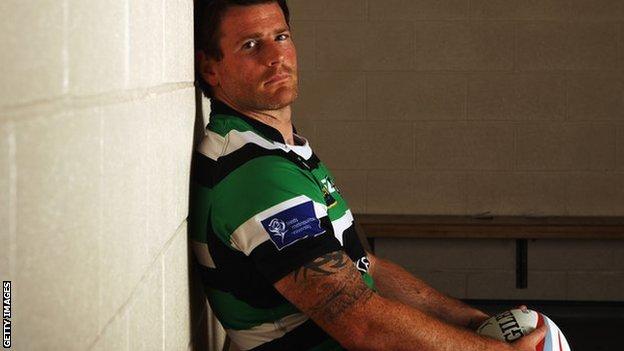 Edinburgh have signed 31-year-old hooker Andy Titterrell on a one-year contract after he left Leeds Carnegie.

The British and Irish Lion, who has been capped five times for England, has been brought in as cover for the injured Steven Lawrie.

Lawrie has been sidelined with a knee injury since December and is expected to miss the start of the season.

Titterrell ended last season on loan from Championship outfit Leeds to Premiership side Sale Sharks, with whom he previously played before moving to Gloucester, and requested to end his contract a year early to find a top-flight club.

"Andy has competed at the highest level for club and country and will offer an exciting option at number two to Ross Ford while we continue to bring on young Alun Walker," said Bradley.

"We're disappointed for Steven as he had a fantastic start to last season.

"However, this appointment means we keep our strength in a crucial position for the start of the season - and through the EMC Tests in autumn, when Ross is on Scotland duty."

Titterrell, who started his career with Saracens before moving to Waterloo, worked with Edinburgh forwards' coach Neil Back at Leeds and is delighted to win a contract with a RaboDirect PRO12 club.

"We've some big pre-season matches coming up against English opposition who I know well, so my focus is really honed in on getting to the know the guys in the squad, settling into the training routine at Murrayfield, and using these matches as a springboard to a big year with the club," he said.