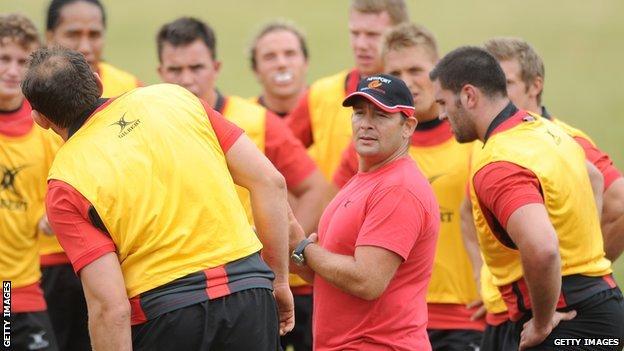 Coach Darren Edwards claims Newport Gwent Dragons's £2.5m debt has not had an impact on his recruitment policy.

The auditor of Newport Gwent Dragons recently said he was concerned about the future of the rugby region.

Recent accounts showed its professional playing arm has debts of £2.5m, putting pressure on the rest of the region.

"We certainly have not cut our squad because of our budget," said Edwards. "Our budget is still the same as last year."

All the rugby regions in Wales are facing financial challenges and all have agreed a £3.5m salary cap to keep costs down for the new season.

"We are well below the salary cap by a long way," said Edwards.

"We have a sound business model and hopefully a sound development plan for our team.

"We cannot be revolutionary, but we can evolve things season on season."

The Dragons have lost experienced captain and Wales lock Luke Charteris to Perpignan, and cult figure and try-scoring wing Aled Brew to Biarritz.

They have always prided themselves of being Wales' self-sufficient and sustainable region, working within their own strict budgets.

Chief executive Chris Brown has claimed the debt was a "wake-up call", but said the region was getting closer to a "break even position".

The latest accounts show that the rugby playing arm of the company - as opposed to the commercial arm - made losses of just over £270,000 for the year to May 2011.

The independent auditor who examined the Dragons accounts says they reveal "a material uncertainty which may cast significant doubt about the company's ability to continue as a going concern".

Brown claimed the Dragons' debt was created by the cost of building a new stand, but plans were in place to pay that off.

Dragons director Tony Brown wrote to season ticket holders to warn them that the region was facing "considerable" debt.

The other regions are also losing money, with Cardiff Blues making an operating loss of almost £2.3m for the year up to May 2011.

In May 2012, Ospreys faced a winding-up petition from Her Majesty's Revenue and Customs over an outstanding tax debt, which has since been dismissed.

And in November 2011, Scarlets reassured fans they were not in financial danger despite a £5.5m debt.

The Welsh Rugby Union and the four regions announced a financial review of professional rugby in December 2011.

The review, commissioned by the WRU, was undertaken by accountancy firm PricewaterhouseCoopers but the results are still yet to be published.