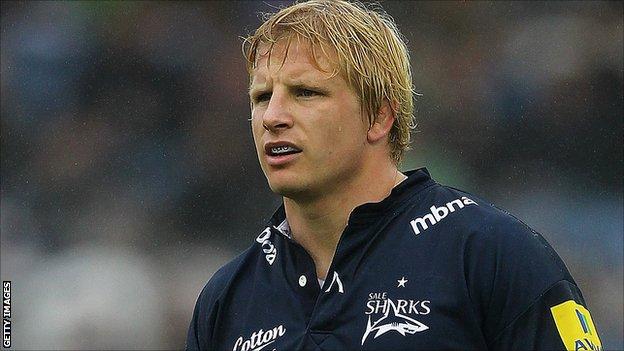 Flanker Dave Seymour has been appointed as the new captain of Sale Sharks.

The 27-year-old led the side at the start of last season in the absence of Sam Tuitupou, who becomes vice-captain.

"It's a massive honour, especially when you look at the strength of players we have in the squad," said Seymour, who joined Sale from Saracens in 2009.

"It was a great honour and privilege to be asked to do the role. I am very excited about the prospect of captaining the side next season."

The England Saxon continued: "It probably helps that I filled in as captain at the start of last season when Sammy was unavailable for the first few weeks.

"It was the first time I'd really captained a side and it was a great experience and I was very lucky to have great help from the likes of Mark Cueto, Nick Macleod and Dwayne Peel.

"It's a big responsibility and big role but I will just try to get out there and play the way I always have.

"Last season was a good one for the club and I felt I went well but that's been and gone and all the focus now is about the next nine months ahead of us.

Sale's new director of rugby Bryan Redpath added: "He's a great role model for both the other senior professionals and all of the younger guys at the club.

"Sam will be vice-captain. He's more the type of guy who leads by example. He's a tough competitor and another who is truly committed to the cause.

"We've got a lot of leaders such as Mark Cueto, Nick Macleod, Danny Cipriani and Dwayne Peel.