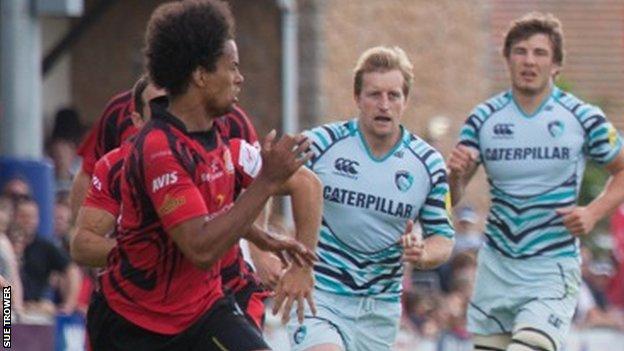 Jersey winger Richard Haughton says the island side is "moving forward" after their pre-season loss to Leicester.

Jersey lost 34-21 as Haughton, along with a number of other new signings, played their first games for the club.

"It was a bit of a nightmare for me with a couple of dropped balls, but as a team we're moving forward and I think we took a massive step," Haughton told BBC Radio Jersey.

Jersey face Loughborough Students in their final friendly on 25 August.

"We couldn't really judge ourselves until we played a game and after that performance we must be happy where we are going," added Haughton, who joined the club from Wasps last month.

The island side begin their inaugural Championship campaign with a match at home to the Cornish Pirates on 1 September.

"That first game of the season, against Cornish Pirates, who've been there or thereabouts for the last four years - as an opening game goes you can't ask for much more," Haughton said.