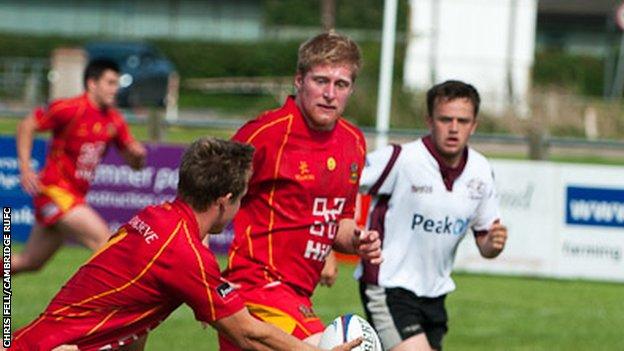 Teenage back row Joe Cousens is to take a break from the English game to help spread the word about rugby sevens in Brazil ahead of the 2016 Olympics.

The 19-year-old is one of a group of coaches and coach educators being sent to Sao Paulo for a year by the Rugby Football Union.

"It's a great opportunity to develop rugby in an up and coming nation," he told BBC Radio Cambridgeshire.

"They're hoping we'll double the (number of) participants in Brazil."

Sevens and golf will join the roster of Olympic sports in four years' time and Cousens, who began his career with Leicester Tigers and is now with Cambridge, and the rest of the group will be starting their work in schools.

"After that we'll go out to the favelas [shanty towns] and develop the game with people who don't have the chance to go to the schools and work with some of their coaches as well, so that when we leave, if we don't go back next year, they've got coaches in place to keep on developing and hopefully have a good team for the 2016 Olympics in Rio," he said.

Brazil already has a national side that competes alongside the major rugby nations in the World Sevens Series.

However, in a football-mad nation, the Brazilian Rugby Association is eager to promote the game at grassroots level and widen their talent pool in years to come.

"The two guys heading up the group have been over there for two or three days.

"Hopefully, they'll want to come to our sessions, develop as players and have some enjoyment - we're there to let them have fun and show them the ropes, basically."