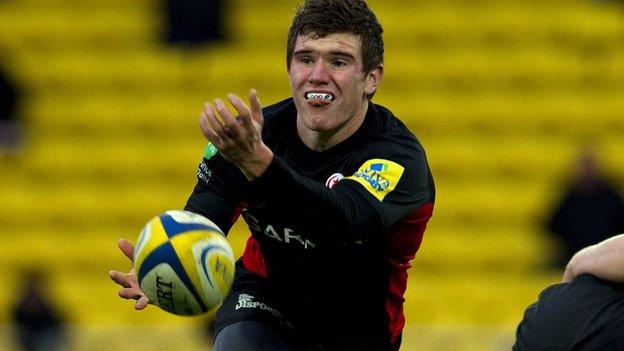 Scrum-half Ben Spencer is looking to cement a regular place in Saracens' match-day squad after being thrown in at the deep end because of injuries.

"Last year was incredible, it all went pretty quickly but I couldn't have wished for a better start," he told BBC Radio Cambridgeshire.

"I hope this year's similar, if not better. It's going to be hard to top."

Spencer, who joined Sarries from Cambridge last summer but goes to watch his former club in action when possible, made four first-team starts for the Premiership club and 11 other appearances as a replacement.

It earned him a place in the England squad for the IRB Junior World Championship in South Africa where a disappointing campaign saw them finish seventh, but with the consolation of a win over Australia in their final game.

"Going into the tournament, I'd only had two caps for the 20s so I was pretty excited, but also apprehensive as well," he recalled.

"The game against South Africa, you couldn't really get a much bigger occasion than that, playing them on their home turf at the Cape Town stadium in front of 15,000 people, but they were a pretty decent side and deserved to win it."

Now Spencer's focus is back on the domestic game and he was involved as a replacement for the fit-again Wigglesworth as Saracens warmed up for the new season with a 24-12 win over Bedford Blues last week.

Their title reign came to an end in May when they were beaten by Leicester in the Premiership semi-finals but Spencer said: "We've got a very strong squad this year and I think we'll be up there again towards the end of the season.

"It's getting tougher and tougher every year, there's no guaranteed wins - we've got to put in a good performance every week and see where it gets us really."