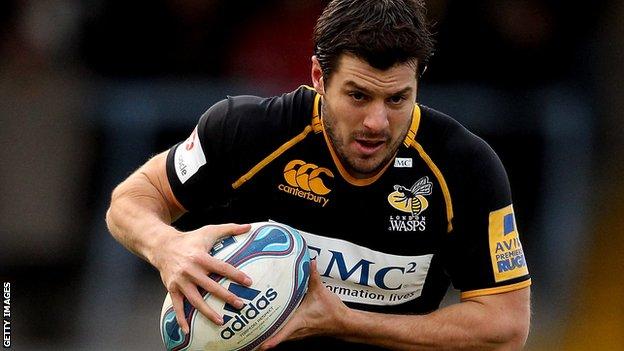 Scotland international Hugo Southwell has been named as captain by London Wasps for the forthcoming season.

The 32-year-old full-back takes over from John Hart, who has retired because of a shoulder injury.

"When I did captain the side on occasions last year it was always a real pleasure because we've got a great bunch of talented guys here and lots of leaders in the squad," said Southwell.

And director of rugby Dai Young says they are the perfect combination to lead the side on the field as they look to improve on last season's efforts.

"Both Hugo and Marco were a massive help in a very difficult season last year and they are both very strong leaders.

"While Hugo is captain, I see Marco as playing a big supporting role throughout the season," he said.

Southwell, who has 59 caps, joined the club last summer from Stade Francais and was chosen as the Players' Player of the Season and rewarded with a contract extension.

"It couldn't be a bigger honour to be named captain and I'm hugely looking forward to it," he added.

"I feel there is a different dynamic at the club this year with the players we have brought in.

"We've added some real quality so it's going to be a privilege to lead them out."