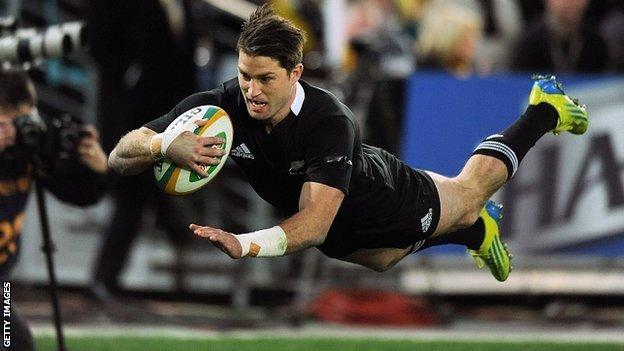 New Zealand beat Australia 27-19 in Sydney in the first match of the four-nations Rugby Championship.

Israel Dagg and Cory Jane scored tries for the world champions before Nathan Sharpe crossed for the Wallabies' only try just before half-time.

Berrick Barnes' kicking hauled Australia to within five points only for Dan Carter's fifth successful penalty to ensure an All Blacks win.

The Rugby Championship was originally the Tri-Nations, but has been expanded this season to include Argentina.

The two New Zealand-Australia encounters in the competition - plus an extra fixture in Brisbane in October - also make up the annual Bledisloe Cup between the two sides.

"You could say it's rustiness, who knows," said Wallabies' fly-half Barnes after his team's opening-round defeat.

"We're going to have to go back to the drawing board and rectify it. We've got a long way to go."

The visitors' solid scrum laid the platform for their first-half tries and only the regular whistling of referee Alain Rolland kept the Wallabies from being even more comprehensively dominated at the set-piece.

The score was 3-3 when Carter drew the Australia midfield before slipping a delayed pass to Dagg, allowing the All Blacks full-back to round opposite number Kurtley Beale and score in the corner.

Beale was then culpable for New Zealand's second try, knocking on a kick under no pressure inside his own 22.

The All Blacks threw the ball left to right from the resulting scrum and Jane finished off the sweeping move.

However, veteran lock Sharpe provided hope for the hosts, powering over for his eighth Test try after Digby Ioane was hauled down just short.

Barnes pulled the Wallabies to within eight points with the conversion and the gap was just five points within five minutes of the restart after the fly-half landed another penalty.

But after an exchange of three-pointers, Carter made the game safe with the final kick of the match, extending his world record points tally in Tests to 1,301.

Australia won the final Tri-Nations, but have not held the Bledisloe Cup since 2002.

The All Blacks and Australia meet again in Auckland on Saturday while Argentina face South Africa in Mendoza.