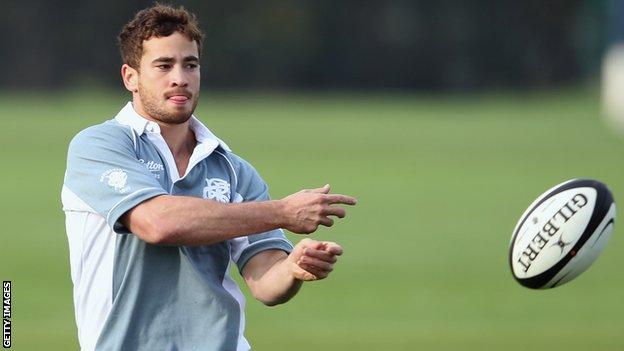 The fly-half is hoping a good season for new club Sale could propel him back into the national side.

Cipriani, 24, has not played for England since 2008 but has been in contact with Lancaster.

"To make the effort to stay in touch, I appreciate that, " he told BBC Sport. "It shows they are still looking at you and thinking about you".

"For me it is about having a good season."

New Sale coach Bryan Redpath has urged the former Wasps number 10 to work hard and be "brutally honest" in assessing his performances for Sale as part of his attempt to regain his England place.

"There are a lot of people waiting for Danny to fail," he said.

"We have to sit down and be brutally honest with each other every week.

"He has come in, trained hard and fitted in well with the players.

"That is all he has to do 12 months of the year and if he does that, he will get his rewards on and off the pitch."

Cipriani, who joined Sale following a stint in Australia with Super 15 side Melbourne Rebels, could make his debut in a friendly against Glasgow on Saturday.