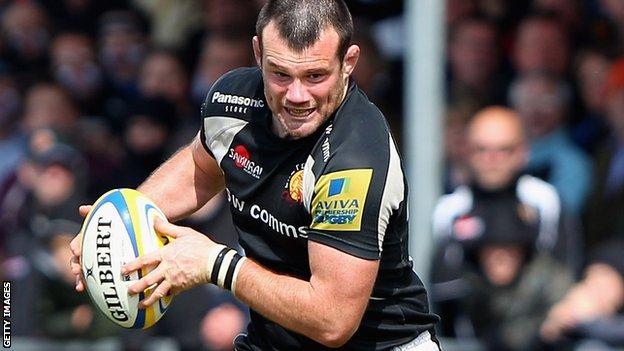 Exeter Chiefs skipper Tom Hayes says the battle for a place in the back five of the club's pack could be the most competitive he has ever encountered.

Hayes told BBC Sport: "We've got a lot of competition this year.

"Damien Welch has come in and done very well in pre-season," he continued.

"And we haven't seen Dean Mumm yet but he brings a lot of quality."

But while Hayes knows he will have to work harder to keep his place in the team, he appreciates the importance the area has been to Exeter's success so far.

"It's an area that sets a lot of tempo for the team and we've been fairly competitive in that area over the last few years even if we didn't have the strength in depth that we have this year.

"It's something that hopefully we'll try and build on and it can only be good for the club."

Head coach Rob Baxter had to strengthen the area following the retirements of and .

And he says with a first-ever Heineken Cup campaign, where Exeter will face Leinster, Scarlets and Clermont-Auvergne, he had to ensure the area was as strong as it could be.

"The reality is that we're not going to have the luxury of potentially resting the guys because of Amlin Cup games.

"Your most attritional areas are in the pack and we have to have the strength in depth there to be able to deal with it all.

"Not just on a match-by-match basis, but you have to be able to train at a very high level as well.

"By having good quality players and a good quality squad you're able to train that little bit harder, with a bit more intensity, and that will tend to follow through on a Saturday."