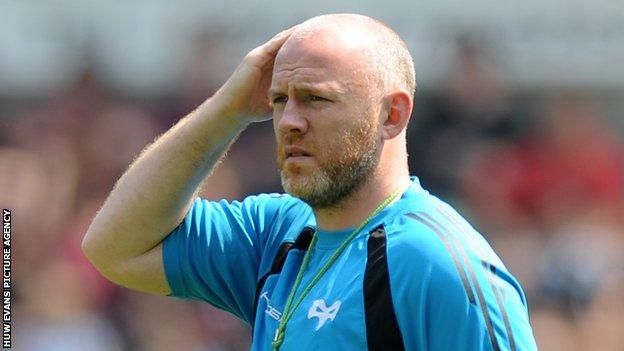 Ospreys coach Steve Tandy was far from happy after his players lost at home to Bath 21-10 in a pre-season friendly at the Liberty Stadium.

The defending RaboDirect Pro12 champions open their league campaign in Treviso on 31 August.

But Tandy was clearly disappointed with the two tries to one reversal on Saturday.

"I spoke to the boys and I told them I am disappointed," said Tandy.

"There's no ifs and buts about it, but there were some glimpses and I'm sure when we review the footage we'll pick the bones out of it and find some highlights."

Am I disappointed with certain aspects of the performance? Yes, I am

The Ospreys found themselves trailing 21-0 early in the second half before Tom Grabham scored a try with Dan Biggar supplying five points with the boot.

It was the Ospreys second pre-season defeat after going down 49-25 in Clermont the week before.

"It's the second game of pre-season and some of the guys are a little undercooked with the amount of rugby they've had. It was a first hit out for some of them," admitted Tandy.

"Obviously I'm disappointed, but there are certain aspects I'm pleased with. It is pre-season, it is a means to an end.

"Am I disappointed with certain aspects of the performance? Yes, I am. There's no getting away from that. Ultimately it's about preparation for Treviso away in two weeks.

"We're two games in, we've come off the back of a very physical week in training, and now we need to improve certain aspects before we go to Treviso.

"We can get too carried away with a pre-season game.

"The young guys are coming through and we've had a chance to look at options over the last few weeks and for the internationals it was their first hit out. We know we have to up our game before we go to Treviso so we've got a fortnight prep time."