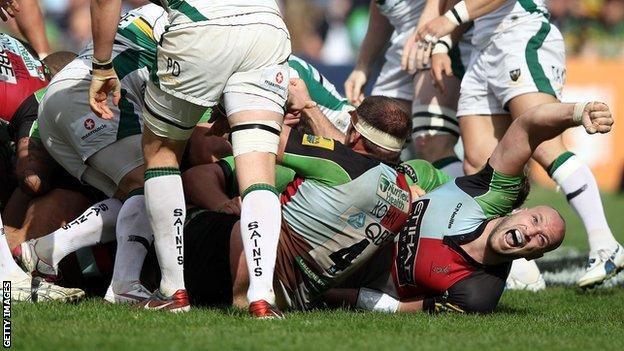 Premiership Rugby will trial greater use of video technology this season in games broadcast live on television.

The referee can ask the television match official to rule on any incident in the lead-up to a try, dating back to the last stoppage in play.

The TMO will also be able to alert the referee to fouls he may have missed.

A concussion bin will also be trialled to make players go leave the pitch for five minutes and have tests to rule out brain injury.

Previously the TMO has only been used to give input on decisions regarding the grounding of the ball.

"The TMO trial in live televised games allows us to maintain the integrity of our competition by ensuring the match officials are given the utmost support in getting crucial decisions right," said Phil Winstanley, rugby director at Premiership Rugby.

"We are extremely mindful about ensuring that we achieve a balance between protecting the integrity of the game and impacting on the dynamic nature of our sport by creating too many stoppages in play."

The concussion bin will be forced upon players if the team doctor or referee suspects they may have suffered concussion, with a temporary substitution being made.

The player will not be allowed to return to the field if the suspicions are proved right after tests.