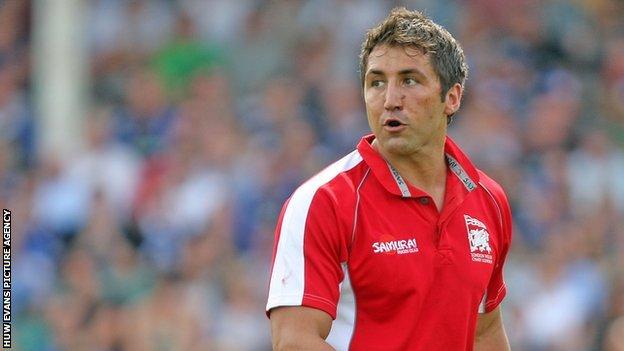 Gavin Henson has dismissed the prospect of a Wales recall as he prepares for his latest career relaunch at English Premiership club London Welsh.

Henson was sacked by Cardiff Blues for off-field misbehaviour in April and feared no other club would employ him.

"I'm a million miles off playing for Wales and they're doing a great job," said 30-year-old Henson.

"They look unbelievable at the moment so they don't need me anywhere near that."

A two-time Grand Slam winner with Wales, Henson has struggled to cement a regular place in club rugby since injuring his ankle in March 2009 and taking 18 months unpaid leave from the Ospreys five months later.

He joined Saracens in October 2010, but played only four games for the Premiership side before asking for his contract to be terminated to allow him to join Toulon.

His last international appearance was in Wales' 19-9 victory over England at the Millennium Stadium in August, 2011.

That ended his hopes of making Wales' 2011 World Cup squad.

After returning to Wales with the Blues in October, 2011 he made eight appearances and failed to score a try.

"In a way, if there's anything good to come out of it - being sacked - it was that I knew things couldn't end like that

His career there ended following allegations of alcohol-fuelled behaviour on a flight from Glasgow to Cardiff on the morning after a Pro12 League game.

"I want another chance to put things right because I thought that was it," Henson said.

"It was going to be my last club. I was made well aware they weren't going to sign me on. That was demoralising.

"If you watch that last game [against Glasgow] where I was brought on as a wing - that sums up the way things were at the club. It was tough," said Henson.

"I couldn't move on to another club. It was starting to get embarrassing. I was more or less finished then, rugby-wise.

"The writing was on the wall before then and they took their opportunity to strike. I fell into that trap really.

"In a way, if there's anything good to come out of it - being sacked - it was that I knew things couldn't end like that.

"I had to bite the bullet and sign again for another club and try and put things right.

"I just have to make sure I stay on the straight and narrow and play the best I can."

Henson has made his playing reputation at centre, but returns to his early-career position of fly-half at London Welsh, where he has joined up with former Ospreys boss Lyn Jones.

Welsh continue their preparations for the new season with a friendly against Scarlets in Llanelli on Saturday.