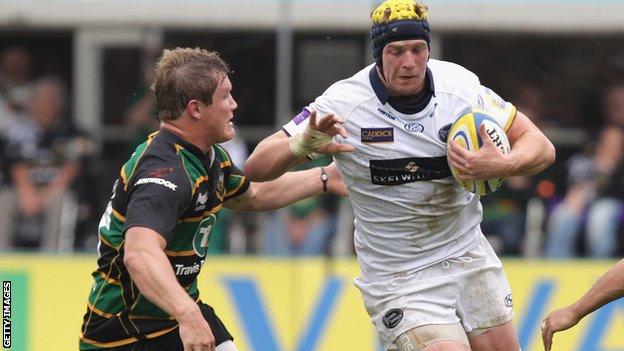 The 31-year-old had been on trial with Saints after leaving French club Bourgoin, where he spent the last year.

"It's great to be at a big club, certainly the biggest club that I've ever been at. I'm relishing the chance to do well here," he said.

Oakley, who has two caps, has also played for Bristol, Newport and Leeds.

However he believes his time in France has helped him become a more rounded player.

"I had to take a lot more onto my own back and become a lot more professional, rather than have it being forced on me, and I had to learn to communicate effectively in a different way.

"I'm glad I got away from the Premiership for a year, it was good to experience a different culture.

"I feel like I'm here refreshed as a player and ready to make the most of my opportunity," said Oakley, who played for Saints in pre-season friendlies against Leinster, Moseley and Edinburgh.

Director of rugby Jim Mallinder believes signing Oakley will increase competition for places, which begins the Premiership campaign at Gloucester on Saturday.

"Quality back rowers are always good to have at the club and we believe that Rhys can contribute to the squad," he told the club's website.

Meanwhile, Northampton Saints PLC, the club's parent company, has announced a net profit of almost £690,000 for the 12 months to the end of May from a turnover of more than £12.8m.