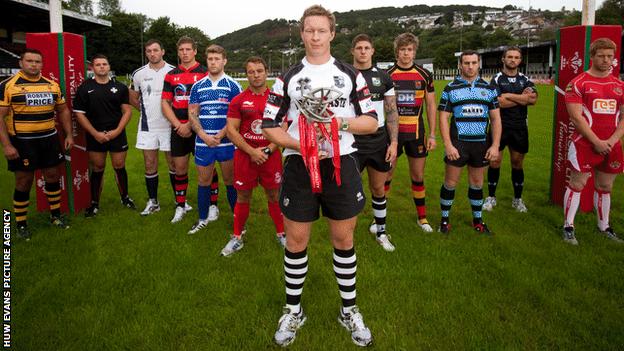 Dale McIntosh says it will be tougher for champions Pontypridd to win the Principality Premiership this season.

The Welsh Rugby Union have cut the semi-professional division to from 14 to 12 teams for this season.

"There are some very good sides in this league and with the player resources down to 12 teams, it now means we have all been scrapping for a few individual players," said Ponty coach McIntosh.

Pontypridd's title defence begins away to Cross Keys on Saturday.

All matches to be played at 14:30 BST on Saturday, 1 September

But McIntosh expects the new slimmed down competition to be of a much higher standard.

"I am sure the consistency of the league now will be up there," he said. "With just 12 teams, every side has strengthened their squad and it's going to be more difficult.

"It will be tougher to win."

McIntosh welcomes the WRU's moves to strengthen the Premiership and expects the standards to rise across the board in the league.

"The WRU have really worked had to make sure it's as professional as possible," said McIntosh.

"The criteria in place is quite stringent but they are doing it for the right reasons.

"Its about the facilities and the coaching being as professional as possible and that is the way forward."