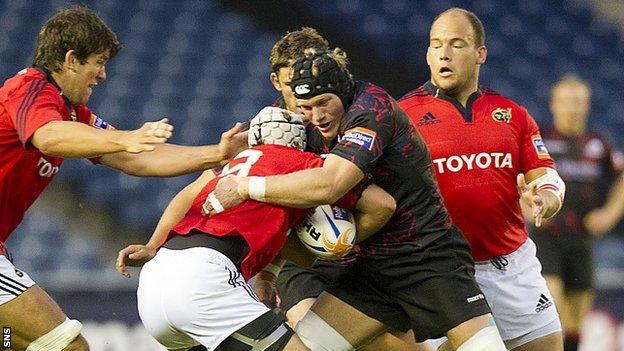 Munster opened their RaboDirect Pro12 campaign with victory against Edinburgh despite a hat-trick from home winger Tim Visser at Murrayfield.

Visser ran in two trademark tries but Ian Keatley added a converted try to his penalty to level before half-time.

Fly-halves Keatley and Greig Laidlaw exchanged penalties before Munster's Luke O'Dea went over and Keatley converted and added a penalty.

Having finished second bottom of the league last season, Edinburgh were keen to make a positive start.

And last season's top Pro12 try scorer Visser made a familiar run on to Greig Tonks's offload to touch down in the corner in the 13th minute.

Laidlaw missed the conversion attempt but Keatley was also unsuccessful with his first kick for Munster moments later.

However, Keatley's second penalty was good and Munster sensed an opportunity to go in front with a forceful charge on their right.

But Edinburgh had other ideas and the turnover led to Richie Rees's pass out left to Visser, who burst away from halfway to once again go over in the corner.

Doug Howlett's chip through bounced kindly for the visitors as Laidlaw chased back, and Keatley retrieved for a simple score before adding the extras.

Keatley kicked Munster ahead for the first time shortly after the restart but Laidlaw responded with his first successful kick of the evening.

A line-out on the Munster left led to the visitors' second try as James Downey's subtle offload released O'Dea to race through and cross under the posts, giving Keatley a simple conversion.

A ruck infringement gave Keatley another straightforward penalty and Edinburgh were left to chase a 10-point deficit in the closing stages.

Visser's score off Nick De Luca's pass gave the home side hope but Laidlaw missed another conversion and Edinburgh were unable to get the try that would have prevented a Munster win.

Michael Bradley's side instead have to make do with a bonus point.