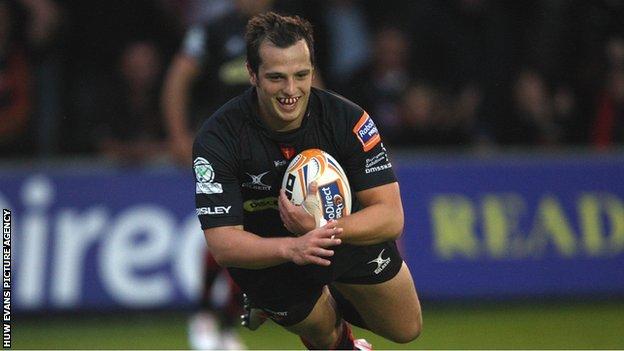 Newport Gwent Dragons gave new Italian side Zebre a harsh welcome to the RaboDirect Pro12 with a bonus-point win at Rodney Parade.

Full-back Dan Evans led the way with two tries in a block-busting first half that also saw Will Harries and Andy Tuilagi cross against the visitors.

Zebre had to settle for Luciano Orquera's two first-half penalties.

Amongst the happy home fans were Wales coach Warren Gatland - expected to be confirmed as the next British and Irish Lions coach on 4 September - and his assistant Neil Jenkins to see a job well done by the Dragons.

Their Italian opponents showed plenty of fighting spirit for their Pro12 debut, but Zebre's defence was found wanting when stretched, leaving them way off the pace at 34-6 at half-time.

Dragons full-back Evans had a glorious 40 minutes. The Wales Under-20 cap, making his debut for the Gwent side after five seasons at the Scarlets, set-up the first try of the campaign for Tuilagi on 13 minutes before scoring two himself towards the end of the half.

But none of those three tries matched the cracker on 19 minutes, when a thumping tackle inside the home 22 saw hooker Steve Jones saw fowards and backs combine to send Harries storming over.

Steffan Jones booted a drop-goal while Prydie added all four conversions plus an early penalty, against two penalties from Zebre stand-off Orquera.

The concern for Dragons coach Darren Edwards, though, must have been how his side dropped the intensity in the second half having established such a big lead.

Zebre, with the pack working as a unit and a wily scrum-half in 14-cap Italy international Tito Tebaldi behind, put pressure on the Welshmen for quite a while in the second period but failed to find a route to the line.

But although they had to settle for a solitary Prydie penalty in the second period, they ended Friday night sitting proudly on top of the Pro12 table, although next week they go to Dublin to face last season's runners-up and Heineken Cup champions Leinster.