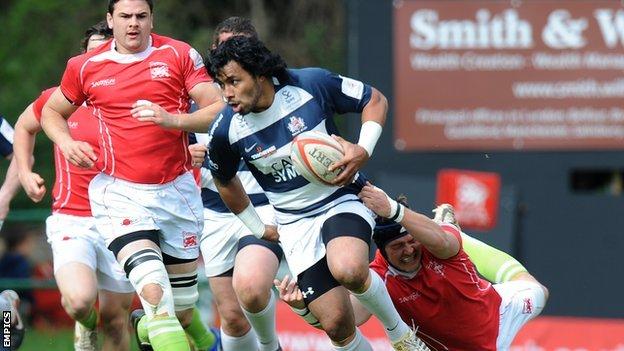 Bristol will be without nine first-team players for their opening Championship game with Newcastle on Sunday.

Centre Fautua Otto (knee) and winger Jack Tovey (back) are among six squad members who are out through injury.

New recruits Alafoti Faosiliva and Gaston Cortes are yet to arrive in the country, while Adrian Jarvis is unwell.

But head coach Liam Middleton told BBC Radio Bristol he is not concerned by the situation: "It's a good time to have it if we're going to have it."

He continued: "There's no pattern to it, or any specific reason. Some of the injuries are carried over from last season, while others have been picked up over the pre-season.

"They're all medium-term injuries. We could be without them for the first eight games of the season but I trust in the guys we've got in the squad.

"We've picked a side [to face Newcastle] who have trained very well."

Bristol were favourites to secure promotion back to the Premiership last term and although they finished top of the table at the end of the regular season, they failed to progress beyond the play-off semi-finals.

Sunday's opponents Newcastle have been backed to make an immediate return, following their relegation from the top flight.

"We never sought to be favourites but I can openly say we quite enjoyed it," said Middleton.

"But Newcastle are clear favourites - there's no doubt about that. They carry all the expectation and the favourite's tag and we'll just carry on with the same attitude as last season."

Despite a tough opening counter, coupled with a depleted squad, Middleton is confident of their chances.

"I think even if we were starting against Jersey, who have come in from the other side, I think we'd be preparing for that fixture as much as we have for this one.

"In the early season the results don't do anything to define what a team will do throughout the season.

"For me, it's just 80 minutes of rugby and it kicks off our season. I'm confident in the players we've got and there's a buoyant attitude around the club."