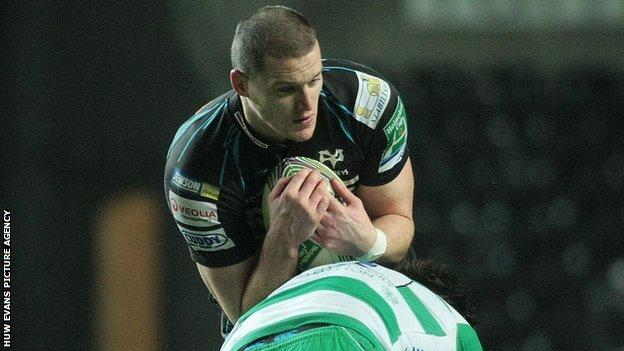 Ospreys made a lacklustre start to their RaboDirect Pro12 defence with an indisciplined defeat away to Treviso at the Stadio Comunale di Monigo.

Wales lock Ian Evans was sent off on 31 minutes for two yellow cards, the first for interfering at a ruck and the second for a dangerous tackle.

Ospreys improved in the second half but had to settle for a losing bonus point from Dan Biggar's two penalties.

The fly-half was wide with three other attempts at goal, while the Welsh side also butchered a handful of decent try opportunities.

Centre Ashley Beck was held up over the line after seeming to be tripped, Biggar opted to go inside from a break with Hanno Dirksen screaming for the ball on the right wing, while Richard Fussell's loose pass snuffed out an overlap on the left.

Admittedly the handling conditions were extremely difficult, after torrential rain in northern Italy had left parts of the pitch with deep puddles.

Evans saw his first yellow card for knocking the ball out of a Treviso player's hands while prone under a ruck, while his second came for a high tackle not long after he had returned to the pitch.

The Italians had Ignacio Fernandez-Rouyet and Dean Budd sin-binned, but Ospreys will rue not being able to take advantage and suffering their first defeat to an Italian team.