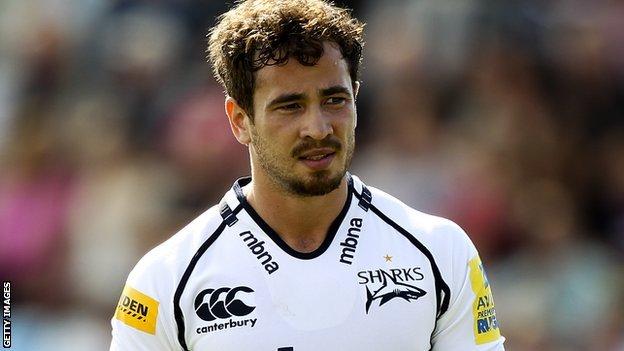 Danny Cipriani had a debut to forget as Sale were well beaten by Exeter on the opening day of the Premiership season.

Cipriani started on the bench but came on after 30 minutes, with the Sharks 11-3 down after Ignacio Mieres kicked two penalties and scored a try.

But Chiefs eased clear after the break with tries from Aly Muldowney, Tom Johnson, two from Matt Jess and another from Chris Budgen.

Sale's points came from Nick Macleod, who kicked a penalty in each half.

Exeter's victory means they have won on the opening day of each of their three seasons in the Premiership.

The Chiefs took the lead with a 45-metre penalty from out wide by Mieres, who then scored their first try of the season after a break up the middle by wing Josh Tatupu and offload to James Scaysbrook.

Mieres missed the conversion but landed another 45-metre penalty, which Macleod soon cancelled out.

Cipriani came on at fly-half, with Macleod moving to centre after Sam Tuitupou limped out of the game, but it was Exeter who extended their lead before the break with a third Mieres penalty.

Muldowney gave the hosts the perfect start to the second half when he crossed after number eight Richard Baxter won good lineout ball, Mieres adding the extras before Macleod landed his second penalty.

After that it was all Chiefs as Jason Shoemark burst down the left before passing to Jess for their third try.

Flanker Johnson crossed for their bonus-point try before Jess burst down the touchline for his second score after good work by replacement scrum-half Kevin Barrett.

Budgen had his hand on the ball at the bottom of the pack to register Exeter's sixth try late on, with Gareth Steenson converting to complete the scoring.

"I have to give great credit to my players, they're just great at doing what we ask them to do.

"You can think of lots of little moments today that turned the game our way. They're the things that will eventually add up and create your try-scoring opportunities.

"We had good tempo today, some good attacking structure and we started to find space. A lot of credit has to go down to your half backs for that."

"To play any team in the Premiership that performance wouldn't have been good enough so there is no hiding place for it.

"It wasn't the game plan not been heeded but individual errors and our detail was poor so we never got to our game plan because there were 10 set pieces that we gave away and they scored on three them.

"There were too many individual errors across the board from lots of people and we all have to take it on board and take the criticism that comes.

"We have Saracens next Saturday and we can't forget this game nor can we dwell on it. We have to man up and take the criticism and show a good performance next weekend which has to be a lot better than this."