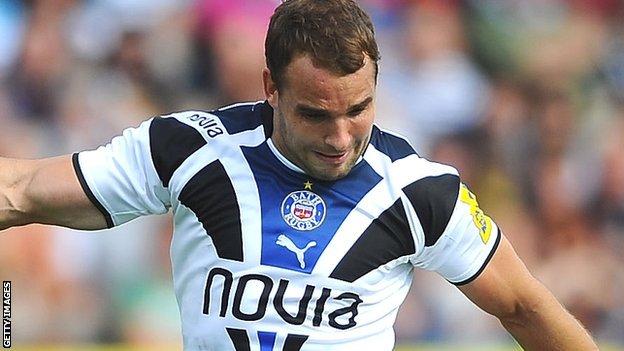 Olly Barkley kicked all 24 points, including a last-minute penalty, to earn Bath a narrow win at Worcester.

Andy Goode scored four penalties inside 14 minutes to give the hosts a 12-point lead, before Barkley closed the gap.

Goode extended Worcester's lead to 15-6 at half-time but Barkley kicked Bath back into the game after the break.

Goode's second-minute 40-metre penalty set the tone for the opening exchanges and he soon added three more to give the hosts a 12-0 lead.

Matt Banahan was yellow carded for a deliberate knock-on and he was joined by rival captains, Stewart Hooper and Dean Schofield, who were sin-binned after a substantial melee involving most of the forwards.

Barkley reduced the arrears with two quick penalties but Goode's fifth successful kick ensured the home side had a nine-point half-time lead.

Both sides' kickers continued to trade penalties and Barkley gave Bath the lead for the first time with a 35-metre penalty after 65 minutes.

Percival drove over from close range for the game's only try to put Worcester ahead again, but Goode's conversion rebounded back off a post which proved costly.

Warriors then had two penalties in the Bath 22, Goode surprisingly missed the first but kept his nerve to kick the second.

And, with the last kick of the match, Barkley made no mistake with his eighth penalty to earn a one-point victory.

"We shot ourselves in both feet. It was a game that we should have won.

"We allowed them back into the game by conceding six penalties in a nine-minute period early in the second half which enabled them to draw level.

"The referee [Luke Pearce] was particularly hot at players not rolling away from the tackle area and those penalties cost us the game.

"Bath have the best defence in the league but we should have scored more before half-time and put them away."

"It wasn't pretty. From where we were at half-time we did very well to bounce back.

"We showed great resilience to get back into the game and nick it at the end.

"At half-time we knew we had to adjust and it was a complete reversal of the first 20 minutes."