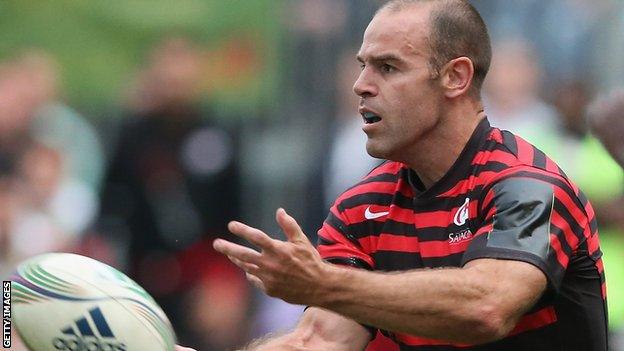 Charlie Hodgson became the first player to pass 2,000 points in the Premiership and England winger Chris Ashton scored two tries on his debut as Saracens thrashed London Irish at Twickenham.

Hodgson achieved the milestone in the 27th minute and ended with 20 points.

Sarries led 12-3 at half-time before Ashton, who was sin-binned in the first half for a late barge on Exiles fly-half Steve Shingler, twice went over.

Brad Barritt and replacement Nils Mordt also touched down for the home side.

Hodgson's seventh-minute penalty gave Saracens the lead, but he was then on the wrong end of a bone-shaking late challenge from Ofisa Treviranus which earned the Samoan flanker a 15th-minute yellow card.

Ashton was then shown a yellow card for his late barge on Shingler and Tom Homer, who was the leading scorer in the Premiership last season but had already missed three long-range efforts, put the only points on the board for London Irish.

Barritt and Mordt also went over after the break, with Ashton's second sandwiched in between.

All four tries were converted by Hodgson, while Saracens flanker Kelly Brown was the third player to be sin-binned, for killing the ball at the breakdown.

"He brings something different. He's never far away from where the action is, particularly when we've got the ball.

"He pops up in unusual positions, which is exactly what we wanted. We are hoping he will take our attacking game forward.

"He played really well today and a lot of the others did too."

"It was a tough afternoon, particularly disappointing for us.

"We came into the season off a very solid win down in Cork, so we came into this in a good space. Our preparation was very good.

"It's been a kick in the pants today. I think we're a better side than the scoreboard showed."