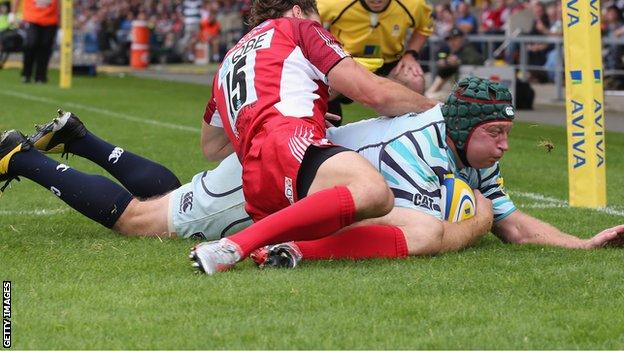 Leicester Tigers spoiled London Welsh's debut as a Premiership side with a convincing win at the Kassam Stadium.

The nine-times champions were soon in front with Thomas Waldrom scoring two tries in the space of nine minutes.

The Exiles, minus injured Gavin Henson, rallied gallantly with Tom Arscott and Hudson Tonga'uiha touching down.

But Geoff Parling, Julian Salvi and Vereniki Goneva all went over for the visitors in the second half, Toby Flood contributing 13 points with the boot.

Watched by London Welsh and Wales legend JPR Williams, it was a momentous occasion for the home side, who beat Cornish Pirates to win the Championship title last season but had to go through an appeal process before their place in the top flight was confirmed.

They were given a warm welcome by a crowd of 6,850 in Oxford but in an untidy opening phase in which both sides missed penalty attempts, Flood finally put the Tigers ahead from 39 metres after Welsh were penalised for collapsing a scrum.

With their noses in front, Leicester dominated possession and Waldrom went over in the left corner after 13 minutes with Flood adding a beautifully-judged conversion from near the touchline. 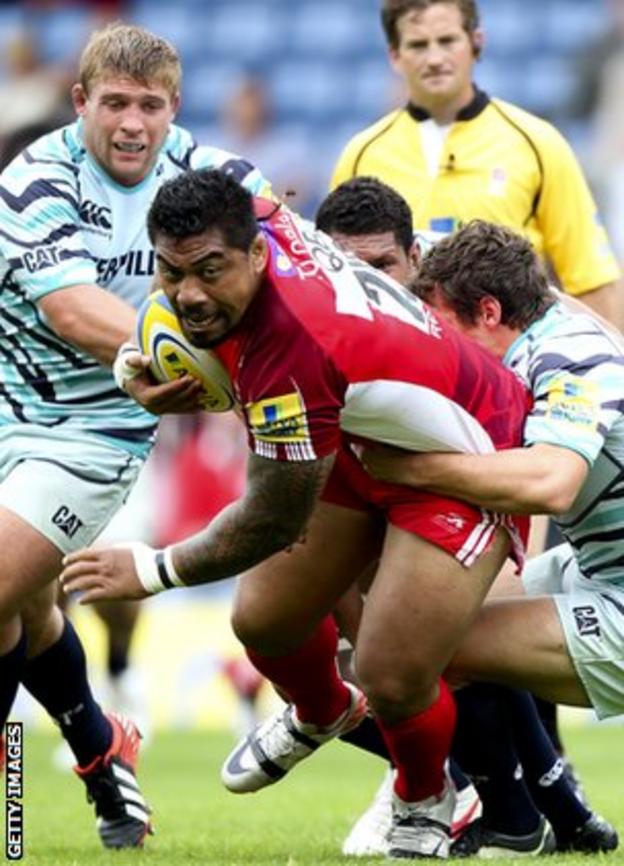 The driving maul proved a productive tactic for Leicester and Waldrom added the second touchdown following a five-metre scrum, again converted by Flood, before Welsh finally managed to generate some attacking momentum of their own.

Prop Franck Montanella was forced into touch just short of the line but their first Premiership try soon arrived as a three-quarter move led to full-back Arscott grounding the ball after being tackled, although it was questionable as to whether his momentum had carried him over the line.

Encouraged by that success, the Exiles caught Leicester napping shortly before the break as Tonga'uiha, last season's top try scorer, picked up from a ruck, broke a Manu Tuilagi tackle and sprinted away to reduce the deficit to seven points.

The Tigers came out for the second half with a purpose, despite the loss of scrum-half Micky Young with an ankle knock, and quickly put the game out of the home side's reach as lock Geoff Parling collected Anthony Allen's flick pass to score and Julian Salvi went over from close range.

With the hour-mark approaching, both teams made changes with Jordan Crane returning in place of Waldrom after missing the whole of last season because of a knee injury.

Fijian wing Goneva, in his first competitive start for the Tigers, ran in their fifth try from a clever pass by Scott Hamilton and Flood made his final contribution with another conversion before making way for George Ford.

"What happened in the summer has been well documented, but the knock-on effect is in the detail of your game.

"We knew we just did not have enough time to put the detail into the game. We had players knocking into each other in areas of the field where they weren't sure what they should be doing and that stood out and it cost us.

"I am not saying we were good enough to win but if we had upped our game at the line-out maybe we could have challenged for a bonus point, but we failed when we had opportunities to launch attacks."

"We come away with maximum points and it was a good workout for us, we did some good things in the first 25 minutes and some poor things in the last 15 minutes of the first half. In the second half we were much more accurate.

"But credit to Welsh they were up for the battle and got themselves back in it and if you are not on your game they will punish you.

"We did not know what to expect from them but there is enough experience in that side and physically they were very good and made life difficult for us."