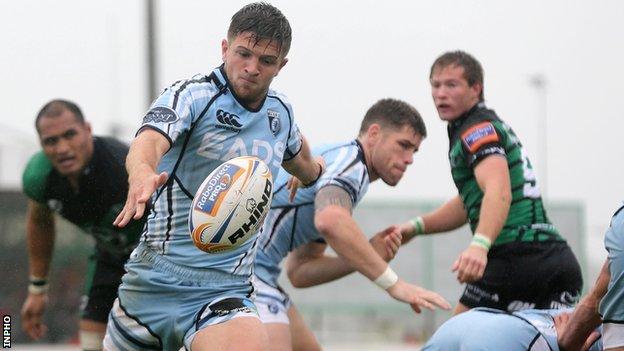 Cardiff Blues started life under new director of rugby Phil Davies with a gutsy win over Connacht in Galway.

The visitors made the most of the wind at their backs in the first half to lead 13-0 at the break.

The Irish province replied with three penalties from Miah Nikora after the interval but were unable to secure the try which would have seen them win.

Missing a number of internationals and hampered by injuries, Davies fielded a number of new combinations and they took their time to settle.

Nikora missed a tricky penalty from the Cardiff 22 after a good bout of set-piece pressure from the Connacht forwards, who included recent Ireland debutant Ronan Loughney.

Cardiff had a strong wind at their backs and began to make headway entering the second quarter, led by their excellent captain Andries Pretorius.

Sweeney booted two penalties in five minutes to edge the visitors ahead against the run of play.

As Connacht's error count increased, the Blues capitalised with Josh Navidi disrupting a home lineout and teenage scrum-half Jones pouncing to score in the corner.

The youngster's first senior try was converted from near the touchline with aplomb by Sweeney, whose opposite number Nikora missed a late penalty chance to reply.

But Connacht rallied after a frustrating opening 40 minutes and Nikora got them off the mark from a central penalty.

As the hour mark approached, clever kicking from Sweeney and Jones allied to the Blues' ability to pinch Connacht lineouts kept them on top tactically.

Too many times the hosts wasted decent possession, a close-in rolling maul should have led to a score.

They gained some consolation in the form of a second penalty from Nikora and suddenly Cardiff were the ones making mistakes.

George Naoupu forced another penalty which Nikora did terrifically well to convert from the right.

However, Eric Elwood's men were let down by indecision and knock-ons at crucial stages as the Blues took home the four Pro12 points.