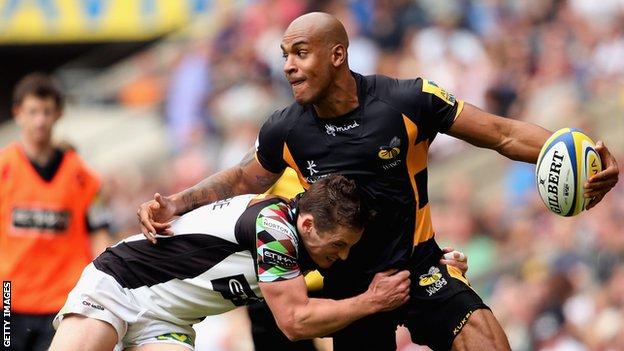 Wasps led 40-13 early in the second half but champions Quins rallied in an astonishing fightback to win 42-40.

The winger told BBC London 94.9: "When you get that far up it's hard not to be complacent. You look at the scoreboard and think 'happy days'.

"Quins are champions for a reason. They stepped their game up and we went to sleep a little bit."

The 26-year-old added: "To lose a game when you have scored 40 points is unacceptable.

"There are a lot of disappointed players and we have got a lot to look at. It was a massive opportunity lost.

"We could have come away with a lot more [than a losing bonus point and a try bonus point] and it's very frustrating."

However Varndell is confident that Wasps, who narrowly avoided relegation last season, will go on to have a successful campaign.

"The first 55 to 60 minutes we were on fire and it was some of the best rugby we've played in the last three seasons," he continued.

"Dai [Young, director of rugby] recruited some fantastic players in the off-season and we've worked hard in pre-season.

"I've got a lot of faith in this team and I know we are going to do some special things this year.

"It would have been fantastic to start off with a win against the champions but it's a long old season."