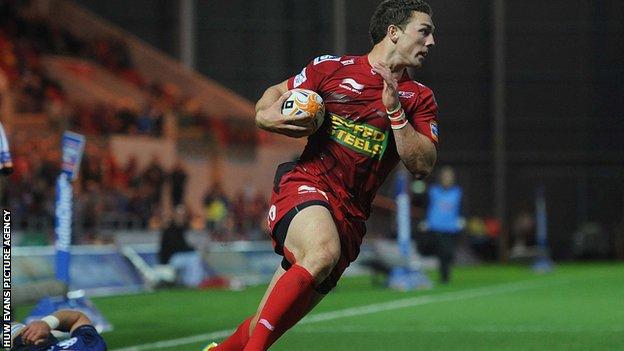 Jonathan Davies believes the Scarlets could be a "real threat" in this season's Rabodirect Pro12 campaign.

The Scarlets have finished fifth and missed out on the top four Pro12 play-offs for the last two seasons.

But Davies, the dual code Wales international and BBC Wales Scrum V pundit, believes the Parc y Scarlets outfit could be the side to watch.

"If they have a platform, keep going, they could be a real threat," he said.

But the former Scarlets captain, who replaced Nigel Davies this summer, has warned his side they cannot afford to rest on their laurels.

"Simon Easterby is right," said Davies. "He said they started well last year but when they got into the big competitions against the bigger sides, they didn't have the platform.

"The youngsters are a year more experienced now and that will help them a lot."

England number eight Ben Morgan has left for Gloucester in the Aviva Premiership.

The Scarlets have recruited South African prop Jacobus Adriaanse and Argentine second row Tomas Vallejos Cinalli in a bid to beef up their set piece.

Davies believes the Scarlets have the firepower in their backline to worry any side, but their ability to compete up front will hold they key to a successful campaign.

"If they can have a platform, they have George (North), Jonathan Davies and Scott Williams," he said.

"If they can win ball from set-piece, their runners and young back row are going to carry the ball and the backs will be a threat."