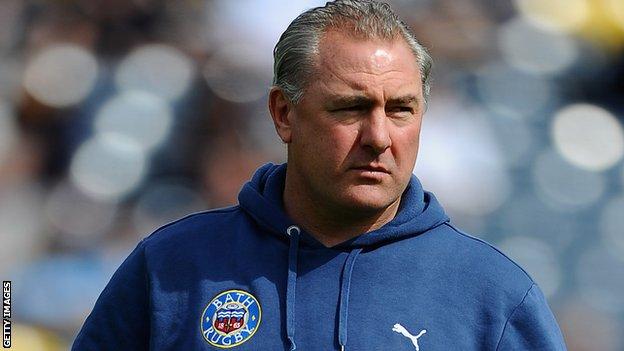 Head coach Gary Gold says he was left uninspired by his first game in charge at Bath, despite them beating Worcester Warriors at Sixways.

Gold's side were trailing 15-6 at half-time before Olly Barkley kicked them back in to the game, with his final penalty securing them a 24-23 win.

"By the standards we've all agreed to set ourselves it wasn't good enough."

Bath did not take the lead until the 65th minute and, after Andy Goode missed two late kicks, it was the accuracy of Barkley that proved the difference.

"I thought Worcester dominated the first half quite emphatically," Gold continued.

"We could have raised our levels of intensity and could have worked harder off the ball.

"But I was happy we never gave up and came out in the second half to claw our way back in to the game."

South African Gold succeeded Sir Ian McGeechan at the Rec during the summer.

The club opted to replace McGeechan after only a year at the helm following a disappointing 2011-12 season, in which they finished eighth in the Premiership and failed to progress past the group stage of the Heineken Cup.

Gold - a former forwards specialist in the South Africa coaching set-up - has previous Premiership experience with Newcastle and London Irish and says Bath will have to up their game if the want to compete for silverware.

"There's a lot of very good teams in the Premiership and if we consistently have performances like that I would say we are going to be in trouble," he added.

"If we can be consistent in setting standards for ourselves and not being satisfied with a performance like this then we'll bring ourselves a bit of hope.

"We don't want to paper over the cracks just because there was a win. We got lucky and luck plays a role in sport, but we shouldn't delude ourselves in to thinking that was a good enough performance.

"We were OK and OK isn't good enough if you want to compete with the best."